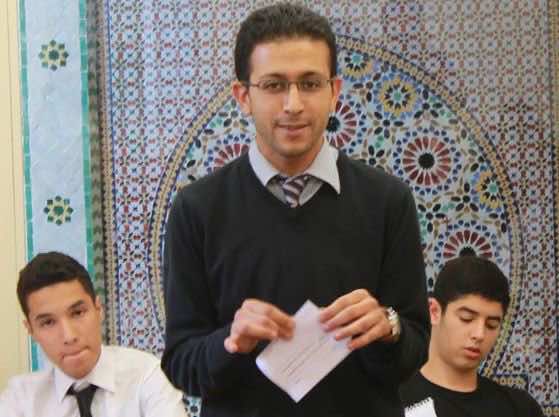 By
Ilona Alexandra
-
Ilona Gerbakher is a student, traveler and writer currently living in Rabat and studying French, Arabic and Darija.
May 28, 2014

Six debaters faced off against one another, discussing both intervention in Syria and the benefits of renewable energy in Morocco. The lively debate, followed by an welcoming audience of parents, students and coaches, confirmed the strength of the Moroccan National Debate Team. But perhaps more than anything else, the competition highlighted the skills and dedication of the team’s incredible coach, Soufiane Choubani.

Mr. Choubani moved back to Morocco after growing up in the United States (New Jersey, to be exact) because he wanted to “make a difference in the Moroccan educational system, and to change the lives of Moroccan youth.” Dedicated to this task, he worked to promote debate in Moroccan universities and high school. For Mr. Choubani, debate is one of the best ways to make a difference for Moroccan youth because “debate develops leaders and individuals gain life-long skills. This is remarkable-it changes lives for the better!”

Soufiane discovered the potential of Moroccan debaters after teaching a Spoken English class at Université Internationale de Casablanca (UIC). He saw that his students, all of whom were learning English as a second language, were incredibly knowledgeable in history, foreign affairs, and politics, and he “immediately thought of forming a team.” He spent the next year teaching debate at the university as a part of his coursework, and later urged his teams to enter numerous national and international competitions. When Moroccan debaters began bringing home trophies at these prestigious competitions, Soufiane began to dream big: What if Morocco could take home an international trophy from the biggest debate competition in the world?

The job of preparing Moroccan high school students to become international-level champions is not easy. This is almost a full-time job for Mr. Choubani, on top of the two other jobs that he works as an ESL teacher and an anti-doping agent. Soufiane trains the national team debaters weekly in different debate and speech techniques, arranges debate competitions on the weekend, coordinates travel with parents and schools, and monitors the students themselves to makes sure they are holding up under the pressure of national scrutiny.

When asked to comment for this article, Mr. Choubani told MWN that: “the most important job that I think I have is to make sure they are mentally prepared to handle an international competition in a foreign country and to represent our nation with pride. It is my duty to show the world debating community that Morocco is a new contender that’s here to stay. Many will be surprised, many will be shock, but all will respect and never forget the day they debated the Moroccan National Debate Team.”

But Mr. Choubani also cautioned that getting to the international competition in Thailand is not a sure thing. Although Soufiane believes that the chance of taking home a trophy are very high–in fact, he says this is one of the best debate teams on the continent–the team is lacking an essential element: team sponsors. According to Mr. Choubani, the team is amazing, but dimply can’t come up with the money by itself to make Thailand happen. But if Thailand does happen, Choubani assures us that the Moroccan team “will be the surprise of the tournament, and will bring pride to our nation on a global level.”

There you have it, Morocco–“a sponsor would make this dream a reality.” Let’s support the Moroccan National Debate Team (http://teammorocco.org/)–with their dedicated coach, excellent debaters and all of this country behind them, a trophy is bound to come home with them!