The FC Barcelona had the upper hand over its rival Manchester United in the UEFA Champions League’s final that took place today at the Wembley Stadium in London. As expected by most foot-ball fans, Messi’s teammates dominated the game with their skillful style since the beginning of the match

Rabat – Pedro scored the first goal of the Azulgrana at the 27th minute after he received a beautiful pass from Xavier. Seven minutes later, against the run of play, Manchester United managed to score the equalizer.

In the second half, Guardiola’ team seemed more determined to win the third Champions League Cup in 6 years (after 2006 and 2009) and the fourth one in the club’s history.

In the 54th minutes, the two-time world player of the year, Lionel Messi, scored the second goal from the area’s edge, giving FC Barcelona the lead for the second time. This time, it seemed that Barcelona was determined not to allow Manchester to pull back into the game. FCThe deadly blow came a few minutes later when, David Villa, scored his team’s third goal from the edge of the area after receiving a pass from Messi. 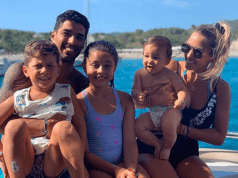