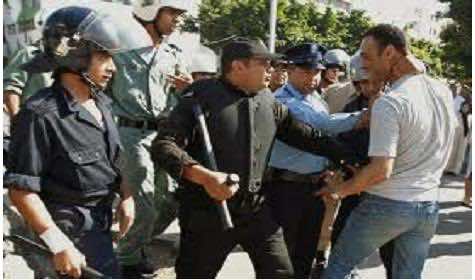 Club wielding Moroccan police riding motorcycles drove into crowds of thousands of demonstrators in the country’s largest city to disperse a protest by pro-democracy activists on Sunday.

A similar protest organized by the pro-reform February 20 movement in the capital’s twin city of Sale on Sunday also was violently disrupted, as was a demonstration in front of parliament a day earlier.

With a hand-picked commission set to recommend amendments to the constitution as part of King Mohammed VI’s own reform process, authorities are showing no tolerance for demonstrations by activists.

“What we want is freedom, dignity and democracy, as well as a decent standard of living,” said Omar, a civil servant who tried to take part in the Casablanca protests before it was dispersed.

“We want a democratic, popular constitution,” he said, as opposed to one designed by appointees of the king, said Omar, who only gave his first name to protect his security as a government worker taking part in a pro-reform movement.

Phalanxes of police motorcycles cruised through the main roads and back streets of Casablanca’s lower income Sbata neighborhood, scattering any attempts by the protesters to regroup.

Heavily armored riot police were also deployed throughout the neighborhood blocking streets to cars and discouraging people from congregating in large groups. There were no official reports of the number of injured.

About an hour after the activists had been dispersed, a few dozen teenage residents of the neighborhood organized their own pro-government demonstration. “Mohammed VI is our only king,” they chanted, while police looked on.