Morocco World News
Home Highlights on Morocco Morocco: When We Fail to Prepare, We Prepare to Fail

Once again nature proves its superiority over human beings with all the technology, advancement and power Man can possess. It works with a divine order that we literally cannot encrypt. 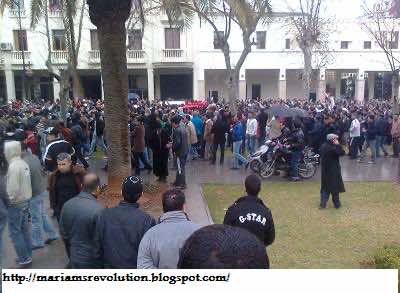 By
Adnane Bennis
-
Adnane Bennis is a national of Morocco, obtained his Bachelor’s Degree in Computer and Information Science from East west University in Chicago.
May 30, 2011
Spread the love

New York – God Almighty has everything predestined for reasons only Him the Merciful Knows. One will not stand still, and should not lay numb, unprepared for anonymous phenomena.

We have to assemble all necessary efforts, power, and suitably equip oneself with the most adequate science, and technology to understand how to combat nature, when it is in great wrath exemplified in earthquakes, hurricanes or rainfalls. Even as this preparedness cannot defeat nature or prevent disaster, it can certainly diminish losses and casualties.

Almost every year, nature intends to deliver an important message to Morocco. Yet, Moroccan authorities dismiss the message, turns its back to what it contains, and fails to comprehend the riddle. Once again the sky proves its persistence in repeating that same message again and again.

On May 16th, the sky poured heavy rain over people who are, to some extent helpless, powerless and totally bewildered. It is surprising to see the ancient city of Fez, the world’s largest medieval city, and the spiritual, cultural capital of Morocco, under siege due to a nonstop rain lasting for a short period of time.

It is our fate in Morocco to suffer tremendous casualties and substantial financial losses every time we have a rainfall. Hysteria, resentfulness, anger and emotional distress are all inevitable effects of this costly disaster.

It is quite intriguing to continuously, for the last 3 months, hear news of Morocco sparking on the surface in most aspects of life. We mostly see public agitations and political demonstrations in all cities with no exception.

Democracy and political reform are the dominant factor that fuel people’s reactions. The initiative to take into the streets was inspired by the Tunisian Jasmine Revolution and strengthened by the success of the Egyptian Revolution.

All demonstrations are organized through the social media networks, Facebook and Twitter, by a group that called itself the Youth Movement of the 20th of February. People have reached an unprecedented level of frustration and despair. This explains why they are asking for a comprehensive change in politics and policies dealing with public life; they also demand an end of corruption, nepotism, power abuse, and immunity of incumbents.

In fact, it is increasingly imperative more than ever to insistently crave for democracy. It is the linchpin to a sustainable development in any sector of modern societal life. Undoubtedly, no argument will be against the inevitable success of political systems, if they are bound by the core principles of democracy, in terms of civil liberties, equal opportunities, human rights and so on and so forth.

A democratic system is an integral governing method whose main tenets are the rule of law and accountability. It can only be implemented entirely, or abandoned entirely. Selecting one principle over another or advocating some rights, while suppressing others does not necessarily mean democratic equality.

Having focused on the notion of democratic government is veritably critical, otherwise how can nations advance without the availability of this basic necessity? Morocco is no exception.

We are bound by the norms and rules of the universe, if we ought to improve our livelihood from good to better. We can sense some slow, disproportionate improvement, sustainable though, but not adequately satisfactory.

Through the course of the last decade, or what is called as “the new era,” we can notice some courageous improvement in the realm of democracy; giving more importance to freedom, advocating a reconciliation strategy to rectify the human rights infringements of the past governments, in addition to the reform of state institutions.

The aforementioned reforms and the openness in perspective reflected by the Moroccan regime in the last few years remain bashful and insufficient. Taking into account the huge challenges facing our nation, the critical geopolitical scene provoking our attention, and notably the stagnating economic conditions leading the world into yet a more destabilized order, it is becoming urgent to reformulate a new strategy of governance based on sagacious and realistic thinking and analysis.

A new notion of citizenship should be forged with duties, responsibilities as well as rights and privileges. The idea of authority has to emphasize that law stands above all, with an indiscriminate equality in front of justice; being responsible, or having the authority over a powerful institution does not give the right to abuse one’s power for personal or external gain.

Needless to mention, corruption, indifference of incumbents and treachery should not go unpunished. Transparency should take the place of ambiguity, competence and hard work ought to be revered more than allegiance, and accountability shall eclipse impunity.

Based on the “Moroccan peculiarity,” I can safely state that no attention is being given to the city of Fez and life goes on similarly like it has been going on for quite a long time. The Moroccan public policy is to gratify and advertise a good image of Morocco, but hide and marginalize all embarrassing, controversial issues that may put the government under pressure. Enough is enough.

The Government should realize that avoiding public scrutiny, ignoring public safety and procrastination in tackling the real problems is the package of failure. Unfortunately, the measures taken in any given incidental affliction is to mitigate the social outcry, give huge unfulfilled promises, offer insufficient solutions and encapsulate the problem inside the box of obliviousness and negligence.

In the developed and democratic countries, Government and city councils are democratically elected with officials truly representing voters and working hard to provide the best management, to find solutions to the problematic issues and to enhance the quality of life of citizens.

Our case is the opposite; city officials are most probably not elected democratically, and votes are cast for a dash of money, a parochial promise or the use of some other delinquent tactics. As a result, an incumbent has no obligation to fulfill his duties, shows no respect for his people and feels no threat of accountability. Greed, revenge, and profiteering are among the motives behind candidacy for most cases.

By putting flesh on the bare bones of the fact, we cannot be mistaken that change does not happen instantly. Prosperity is not a product of arbitrary, gloomy policies. Development will not be reached without sacrifice and hard work. Our crises in Morocco are multiple and ominous: a crisis of awareness, of confidence, of imagination and a crisis of leadership.

Who is responsible? Society as a whole disparately shares responsibility one way or another. We cease to care for matters that affect our well-being, and consequently the accumulation of issues over the years may fuel endless intractable problems.