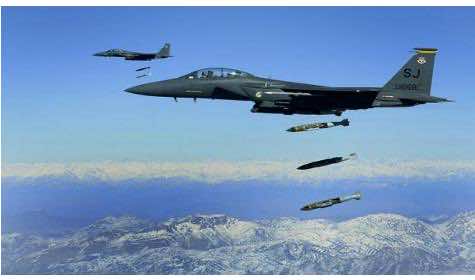 NATO warplanes have been raising the pace of their air strikes on Tripoli, with Gaddafi’s Bab al-Aziziyah compound in the centre of the city being hit repeatedly.

A video posted online showed hundreds of angry funeral mourners chanting slogans against Gaddafi, in what activists called proof that demonstrations were growing in the capital.

Gaddafi has retained control of the capital and the west of the country while the east is in the hand of rebels.

Foreign journalists in Tripoli have limited freedom of movement and have had difficulty verifying the extent of hostility or support for the leader in a capital with a fearsome security apparatus.

The video showed hundreds of demonstrators at a funeral, filling a street and chanting ”Muammar is the enemy of God!“ and ”God loves martyrs!“

Activists said it was filmed on Monday at the burial for two slain protesters in the Souq al-Juma district of the capital, an area that has seen some clashes between demonstrators and government security forces in the past.

It was not immediately possible to independently verify the location and time of filming.

Britain said on Sunday it was to add ”bunker-busting“ bombs to the arsenal its warplanes are using over Libya, a weapon it said would send a message to Gaddafi that it was time to quit.

”Our operation in Libya is achieving its objectives … We have seriously degraded Gaddafi’s ability to kill his own people,“ NATO Secretary-General Anders Fogh Rasmussen told a NATO forum in Varna, Bulgaria.

”Gaddafi’s reign of terror is coming to an end,“ he said.

Britain and other NATO powers are ratcheting up the military pressure to break a deadlock that has seen Gaddafi hold on to power despite a rebellion and weeks of air strikes.

U.S. Admiral Samuel Locklear, commander of the Joint Operations Command at Naples, declined to comment on whether NATO would put forces on the ground but suggested a small force may be needed to help the rebels once Gaddafi’s rule collapses.