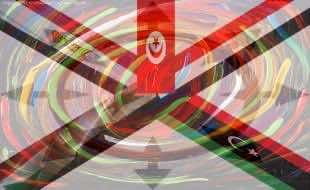 We say “with no exceptions” because the two successful revolutions have not yet reached clear road maps. The target for all revolutions was nothing more than accomplishing the slogan “the people want the change of the regime.” After that, nobody knows.

Besides, all revolutions from Tunisia to Syria have been without a leader, who should be balancing things in order to reach the shore of safety.
That’s why it is not strange that ‘anger’ is still prevailing in Egypt until now. Two weeks ago, Al Tahrir Square hosted a so-called ‘second day of anger’ after the ‘first day of anger’ did not succeed except in only toppling President Mubarak and his regime!

Along the past four months, Egypt was threatened by sectarian tensions and the elite had fears that fundamental Islamist trends would become in control of the country. The inspiring leader—who was always there along the Egyptian history—did not show up to lead the moment of transition. Accordingly, a new trend emerged calling for the return of a regime that was ousted 59 years ago when the July 23, 1952, toppled King Farouk, the last ruler of the Mohammed Ali Pasha.

It is quite strange that many pages on the Facebook—currently being tackled by the Egyptian mass media—calling for the return of king Ahmed Fouad II, who was only 6-month-old when the 1952 Revolution forced his father King Farouk to give up the throne. Months later, the Revolution toppled him and declared the nation a republic.

What are the qualifications of King Ahmed Fouad II (60 years) that might make him the awaited inspiring leader, in light of the current ‘tunnel’?!

The numerous Facebook pages did not mention any qualifications except that he and his family have the right in the Egyptian throne. These pages are also full of praises for the royal era, which the post-1952 Revolution generations know only their opposites.

In Yemen, the tunnel is longer and darker. The country was originally a ‘failed nation’ during the regime of President Ali Abdullah Saleh, with the spread of chaos, tribal influence and the threat from Al Qaeda—that became in control of the city of Zinjibar a week ago—followed by the control of some tribes on big parts of the city of Taez.

Central ruling has always depended on the coalition among tribes. Accordingly, the fall of the regime or if it is dragged into a war with those tribes, similar to what is happening now with the Hashed Tribe, led by Al Sadeq Al Ahmar, qualifies those armed tribes to get in control of and declare the independence of small emirates or kingdoms. Only then, the region overlooking the Red Sea, the Indian Ocean and the Horn of Africa would be on its way of complete chaos and several armed conflicts that would no doubt affect the neighboring states and their economies, especially the oil.

The Yemeni revolution might succeed in ousting Mr. Saleh, but it has much less luck than Egypt as it doesn’t have any ruling map for a state that is much liable to division by tribal forces and fundamental groups.

President Saleh had said that his exit would lead to the division of the country to sheikhdoms, sultanates and imamites—named after the Zaydi Imamite that was toppled by the 1962 Revolution. Mr. Saleh had pointed out in the past that the Huthis are calling for the return of the imamate.

However, the division is not limited to Mr. Saleh’s exit only. Without a clever ‘surgeon’ Yemen will end up with such division with the presence or absence of Saleh.

An audio message by Colonel Muammar Qaddafi on Tuesday night contained a threat of tribal conflict. Accordingly, there is a Libyan trend calling for the return of the Snousi Kingdom, which was toppled by Al Fateh Revolution in September 1969.

The surgeon is the ‘leader’ who usually emerges in the last minute. The Egyptians await him to end the current political liquidity and the Syrians expect him to put an end to a possible sectarian strife and so do the Yemenis, the Libyans and the Tunisians.