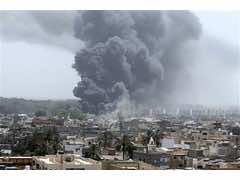 Thousands of troops loyal to Libyan leader Muammar Gaddafi advanced on the rebel-held western city of Misrata on Wednesday, shelling it from three sides in attacks that killed at least 12 rebels, a rebel spokesman said.

“He has sent thousands of troops from all sides and they are trying to enter the city. They are still outside, though.”

He added that 12 rebels had been killed and 26 wounded.

The offensive followed a lull in NATO bombing of Tripoli on Wednesday, after 24 hours of some of the heaviest bombardments of the Libyan capital since air strikes began in March.

NATO defence ministers met in Brussels on Wednesday, but there were few signs of willingness to intensify their Libya mission, which has so far failed to oust Gaddafi.

The alliance says the bombing aims to protect civilians from the Libyan leader’s military, which crushed popular protests against his rule in February, leaving many dead.

But with officials like British Foreign Secretary William Hague talking explicitly of Gaddafi being forced out, critics say NATO has gone beyond its U.N. mandate to protect civilians.

Western powers are lining up behind the rebels. Spain on Wednesday said it had recognised their National Transitional Council as the country’s only representative.

“I’m here today to confirm that the National Transitional Council is the only legitimate representative of the Libyan people,” Spanish Foreign Minister Trinidad Jimenez told reporters in the eastern Libyan city of Benghazi on Wednesday.

Rebel spokesman Abdulrahman said from Zintan that Gaddafi’s forces had also shelled the western town on Wednesday morning, after massing large numbers of troops towards it.

“They are now using anti-aircraft weapons,” he said.