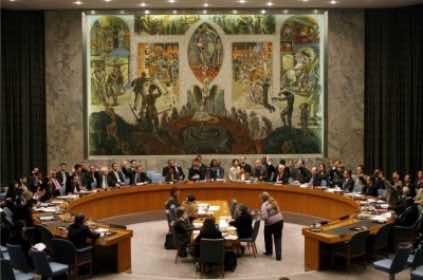 The United Nations Security Council held a closed informal meeting on Wednesday to discuss a draft resolution put forward by the United Kingdom and France and supported by the Western countries members of the Council. The United States, though not originally part of the countries sponsors of the resolution, has joined in showing support for it.

According to the Associate Press, the U.N.’s top human rights official has accused Syria of trying to “bludgeon its population into submission” by attacking anti-government protesters with snipers, tanks and artillery.

The draft resolution condemns Syria’s suppression of protests, but stops short of authorising concrete action. According to diplomats at the Security Council, the resolution has faced stiff opposition from Russia and China as well as India, but it is unclear whether Russian or China will go as far as vetoing the measure. The Russian delegation indicated that Russia did not support a resolution on Syria.

On Wednesday Vitaly Churkin, Permanent Representative of the Russian Federation to the United Nations, said that his country is “not persuaded [a resolution] can help establish dialogue and reach a political settlement” and that it will have the opposite effect.

Although one argument cited by delegations opposing the measure at the Security Council was that the situation in Syria is an internal issue, recent developments have added a regional and international dimension to the crisis. On Thursday, the UN agency for Palestinian refugees condemned the deaths of at least four people at a refugee camp in Syria in clashes that broke out earlier this week, which came after Palestinian residents of the camp protested what they saw as an attempt by the Syrian regime to use the Palestinian refugee cause to divert attention from the crisis in Syria. In the north, Syrian refugees have started pouring into Turkey, as families escaping the embattled town of Jisr al-Shughour gather along the frontier amid fears of a further clampdown by security forces.

In an attempt to garner more support for the text at the Council, the sponsors have made revisions to the text adding concern for violence directed at Syrian security forces as well. They have also added language that stresses that the solution to the crisis in Syria has to be achieved through national dialogue.

In the meantime, the Telegraph reported that an amateur video footage, its authenticity unverified, emerged showing a man identified by activists as Maher al-Assad, the President’s brother, taking pot shots at protesters. The paper went on to say that it is not the first time that he has allegedly been captured on film at the scene of a massacre.  For three months, the world has stood by, either unwilling or unable to prevent the death or imprisonment of thousands of people. Having Iran firmly behind the regime, the likely outcome is that Assad will cling to power, but be left a pariah. That would be an embarrassment for the international community and a tragedy for his victims.