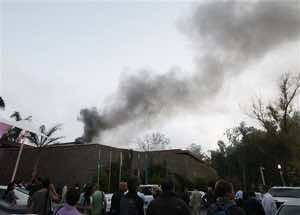 NATO airstrikes rattled the Libyan capital Thursday with clusters of bombing runs believed to have targeted the outskirts of Tripoli.

At first, the intensity of the attacks suggested a return to the heavy NATO bombardment that hit military installations across the capital on Tuesday and flattened major buildings in leader Moammar Gadhafi’s sprawling compound in the center of the city.

By nightfall Thursday, a total of 14 air attacks had been carried out, considerably fewer than Tuesday. There were eight explosions in a first series of strikes on Thursday and hours later, the sound of six more airstrikes boomed in the distance. Government officials did not say what had been targeted in the Thursday bombing runs.

The strikes are in support of a four-month-old rebel uprising that seeks to push Gadhafi from power after four decades. Rebels have taken control of swaths of eastern Libya, although fighting has since become a stalemate even with NATO support.

Gadhafi shows no signs of ceding power under the building pressure of the NATO strikes, despite repeated attacks on his compound, government buildings, military radar emplacements and other army installations.

But the chief of the U.S. CIA, Leon Panetta, said in testimony before the Senate Thursday the NATO military operation, strong economic sanctions, and enforcement of the no-fly zone are putting tremendous pressure on Gadhafi. U.S. President Barack Obama has named Panetta to take over as Defense Secretary this summer.

Among other signs of building pressure, U.S. Secretary of State Hillary Rodham Clinton said Thursday that there are “numerous and continuing” overtures by people close to Gadhafi to negotiate his departure from power.

Speaking to reporters after an international conference on Libya in the United Arab Emirates, Clinton said proposals from “people close to Gadhafi” presented to unspecified countries included the “potential for a transition.” But she said she could not predict if they would be accepted.

Fighting on the ground between Libyan government forces and the rebels had largely died down after the NATO strikes began. The Western alliance took to the skies over Libya under a U.N. resolution that allowed NATO flights to protect civilians. What began as a no-fly zone quickly evolved into strong attacks on the regime.

On Wednesday, however, Gadhafi forces renewed their shelling near the western city of Misrata, killing 10 rebel fighters. Misrata is one of the few footholds rebels have in western Libya. NATO reported it had destroyed a “electronic warfare vehicle” and military training camp in the vicinity of the city as government forces had renewed their assault on the port city.

“It is an example that the Gadhafi regime still constitutes a threat to the civilian population,” he said. “We will stay committed as long as necessary,” Fogh Rasmussen added.

Media in neighboring Tunisia, meanwhile, reported more defections Thursday from Gadhafi’s military, including a general and 10 ranking officers who they said crossed into the country this week.

Despite the inability of NATO and the rebels so far to oust Gadhafi, preparations are being made for a post-Gadhafi era in the country.

At Thursday’s meeting in the United Arab Emirates, donors pledged more than $1.3 billion to help support Libya’s main opposition group. Italy and France offered a combined $1.02 billion to Libya’s Transitional National Council, while Kuwait and Qatar promised a combined $280 million to a fund set up to provide transparent assistance to the opposition.

The pledges came as council members appealed for urgent infusions of cash to keep from going broke. The council is trying to establish an alternative government to take over after Gadhafi.

Libya’s former U.N. ambassador, Abdurraham Mohamed Shalgham, attended the gathering as a senior official of the rebels’ National Council. He said NATO should focus more strikes on Gadhafi forces around Misrata to help “the youth freedom fighters to move toward the capital Tripoli.” Shalgham said he believed Gadhafi was in the final days of his rule.

“I think our youth will be in Tripoli in some weeks,” Shalgham said.

Also on Thursday, Senegalese President Abdoulaye Wade visited Benghazi to meet with the Council’s leaders. He urged Gadhafi to stop fighting and called for NATO to end airstrikes.

“I am someone who can help you (Gadhafi) to relieve yourself from political power,” Wade told reporters in a message to the Libyan leader, stopping short of offering Senegal as a country of refuge.

NATO rejected any post-Gadhafi role for the alliance, saying it was imperative that the international community, the United Nations in particular, start preparations for helping the country’s transition to a democratic government.