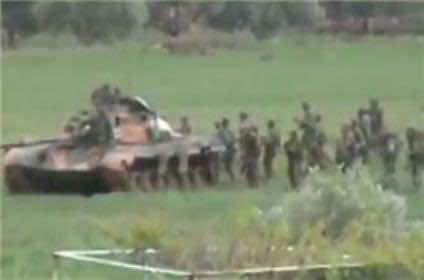 Syrian troops backed by dozens of tanks massed outside a virtually deserted town near the Turkish border Friday, preparing to move in after protesters and mutinous forces rose up against the rule of President Bashar Assad.

Thousands of residents who have fled into Turkey have depicted a week of revolt and mayhem in Jisr al-Shughour, saying Syrian police turned their guns on each other and soldiers shed their uniforms rather than obey orders to fire on protesters. Syrian state television said Friday the operation aims to restore security in the town, where authorities say 120 officers and security personnel were killed by “armed groups” last week.

Tanks were on the outer edges of Jisr al-Shughour, preparing to enter, an AP reporter accompanying Syrian troops on a government-organized trip said. He said the army announced the start of operations at around 5 a.m. Friday. Witnesses contacted by telephone said most residents had abandoned the town of up to 45,000.

Syria sharply restricts local media and has expelled foreign reporters, making it virtually impossible to independently verify reports about the uprising. The invitation to an AP reporter to accompany troops on the operation in Jisr al-Shughour appeared to reflect a Syrian government effort to counter negative publicity about its crackdown and show the existence of armed gangs.

The military was securing areas on the way to Jisr al-Shughour before bringing in a group of journalists to talk to residents.

“Now we feel safe,” said Walida Sheikho, a 50-year-old woman in the village of Foro, near Jisr al-Shughour.

She and other residents offered food, water and juice to the Syrian troops and said the army was deploying in response to their appeals.

Syrian television said the operation to “liberate” the town from “armed gangs” came in response to the appeals of residents who were terrorized by the groups. The government has often blamed violence on gunmen and Islamic extremists, though there are widespread accounts of security forces firing on unarmed protesters.

Witnesses, however, have said Syrian police turned their guns on each other, and soldiers shed their uniforms rather than obey orders to fire on protesters.

Reports of an imminent operation by the military prompted an exodus of refugees to Turkey. About 2,700 Syrian refugees have crossed into Turkey since the nationwide uprising against Assad began three months ago, with most fleeing in the last two days.

But a man in the town blamed security forces for the crop-burning. He said the few remaining residents were collecting car and truck tires to set them on fire in an attempt to try to block the advance of the army. He said by telephone to an AP reporter in Beirut that a military helicopter had flown over the area Thursday night, firing flares on a possible reconnaissance mission.

The resident said tanks entered the village of Sirmaniyeh, five miles (12 kilometers) from Jisr al-Shughour. He and other activists reported hearing bursts of machine gun fire from the army.

The military operations are part of a crackdown on the three-month-old uprising against Assad, whose family has ruled Syria for more than 40 years.

Human rights groups say more than 1,300 people have died in the nationwide crackdown, most of them unarmed civilians. A government spokeswoman has countered that a total of 500 security forces had died in the revolt.

Turkish Prime Minister Recep Tayyip Erdogan, who had close ties to Assad, described the crackdown in Syria as “savagery.”

Interviewed on Turkey’s ATV television late Thursday, he said some images coming out of Syria were “unpalatable” and suggested Ankara could support a U.N. Security Council decision against Syria.

He accused Assad of taking the situation “too lightly” and harshly criticized the president’s younger brother, Maher, who is believed to command some troops in the Jisr al-Shughour operation. Maher Assad is also in charge of the elite Republican Guard, whose job is to protect the government.

“I say this clearly and openly, from a humanitarian point of view, his brother is not behaving in a humane manner. And he is chasing after savagery,” Erdogan said. The interview was posted on the Internet.

The comments reflected Ankara’s frustration with Syria after weeks of attempts by Turkish officials to coax Syrian authorities into implementing democratic reforms.

Officials said the Turkish Red Crescent was setting up two new camps near the border, in addition to the one where refugees have already been placed.