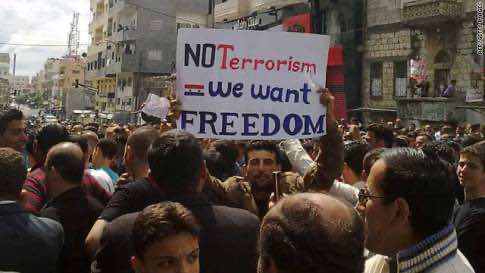 US Defence Secretary Robert Gates piled pressure on Syrian President Bashar al-Assad on Friday, saying his very legitimacy was on the line after the “slaughter of innocent lives”.

“The slaughter of innocent lives in Syria should be a problem and concern for everybody,” Gates said after a speech in Brussels.

“And whether Assad still has the legitimacy to govern in his own country after this kind of a slaughter I think is a question everybody has to consider,” he said.

Referring to the wave of revolts against dictators across the Arab world, Gates added: “There clearly is a dividing line in the Middle East between the rulers who are prepared to slaughter their own people to stay in power and those who are prepared to transition (out of power).”

The United States threw its weight Wednesday behind a UN Security Council resolution proposed by Britain and France that condemns Syria for its brutal crackdown on opposition protesters.

But Russia, one of five veto-wielding members of the council, said Thursday it was opposed to any resolution on Syria.

Assad’s regime has come under mounting international pressure over accusations of massacres of pro-democracy protesters and rights activists.

His army launched Friday a crackdown on what the regime described as “armed gangs” in the flashpoint town of Jisr al-Shughur, where authorities say 120 police and troops were massacred earlier in the week.

Opposition activists and various witnesses, however, say the deaths resulted from a mutiny by troops who refused orders to crack down on protesters.

Anti-government demonstrations erupted in March and more than 1,100 civilians, including dozens of children, have been killed in the ensuing crackdown, human rights groups say