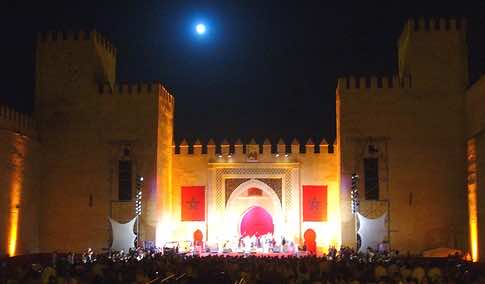 The Fes Festival faced pouring rain early this week but that did not dampen the spirits of the tens of thousands of people who mill around this beautiful old city in search of beauty and the inspiration that comes from a rich menu of sacred music. In a world where interfaith dialogue rarely makes headlines and provokes not a few cynical asides, it is heartening to see both large audiences and a forest of cameras and recorders at the Festival’s “idea” segment, the Fes Forum. Why? The notion of linking the world’s cultural diversity and its challenge meets a strong echo. And the inspiration of music frees people from set patterns of communications, opening the path to fresh exchange and a lively dialogue.

On Sunday and Monday (June 5 and 6) the Forum plunged into hot waters, with two morning sessions devoted first to the conflict in the Middle East, and second to the turbulent events that have shattered apathy and perhaps complacency in North Africa. The youth uprisings inspire great hopes here, and real apprehension. Here in Fes, there is a sense of sitting near the epicenter of the seismic changes that are transforming not only politics but also culture and social norms.

Beginning on an artistic note, Sunday’s discussion began with a reflection by Dr. Katia Legeret Manochhaya (professor at the Sorbonne) on India’s traditions of wisdom. Wisdom is so tightly connected to spirituality that the two are inseparable. Asked about wisdom, many Indians look up to the seven great sages who they see in the constellation of the Great Bear. “Ri” evokes the three actions that are attributed to the wise: to situate, to participate, and to act. In India, the rich spirituality of wisdom is conveyed above all through stories and art, legends and parables drawn from the great texts, and above all the Bhagavad Gita. That is how the young learn and the traditions are transmitted.

We moved swiftly from Indian spirituality to the turbulent present realities of the contemporary Arab world and the Near East, with the geographic and spiritual focus shifting rapidly through the morning’s discussion. The rhythm and tempo of discussion rose: emotions ran deep as sensitive, often taboo, topics were evoked. However, one participant’s reflection was that the capacity to discuss and exchange frankly on these issues marked an opening.

What is the “Near East”? Majid Rahnema, reflecting on Iran’s revolutionary history, painted a large canvass for the day’s discussion. He tied the “surprises” of political uprisings to the world’s social injustices, especially today the four billion people who are poor. Then Mahmoud Hussein (pseudonym for two French Egyptian scholars and activists) read passages from their work that traced the daily evolution of Egypt’s political transition, again evoking the themes of surprise set against the deep forces at work which explain this year’s events. Edgar Morin saw many parallels between the French Revolution and today’s changes and challenges: the blend of hope and anger, in the face of arbitrary dictatorships and corruption. Symbols bring people together and mobilize them to move beyond paralysis and apathy, whether the young Tunisians and Egyptians confronted by arbitrary, cruel power, or the Bastille in the France of 1789. The principle of liberty is the thread that links these political earthquakes.

With so many injustices and conflicts in the world, why, asked Edgar Morin, does the Palestine-Israel conflict assume such a central role? Is it a cancer that has metastasized to the world? This theme of cancer and of the open wound of conflict touched off exchanges that evoked many unresolved debates. What are the causes of conflict, what leads to their transmission, and where can we find the balance between the very local elements of conflict and their global ricochet effects in today’s fast moving world? Where are the solutions?

Nabil Ayouch brought a deeply personal element that transformed the discussion. His own family and upbringing — Muslim and Jewish — led him to question deeply both identity and assumptions. He came then to work with film, and specifically travelled to the tragic refugee camps in Lebanon and to Israel and its dynamic and connected young generation. Religion and politics, geography and culture, all are part of the paradox of the present. His conclusion: that the worst enemy today is not hate but indifference — the capacity of Israel, especially, to cut itself off from the history and present realities of its neighbors. Yet he recalled the wise words of a young girl who said it is not the land that is too small, but people’s hearts.

The latter discussion and the intense questioning from the audience centered on the Palestine Israel conflict. The paradox was evoked again and again: the solutions to the conflict appear to be well known, yet the current situation is blocked, hopelessly it seems. Borders, Jerusalem, refugees, come up again and again in an endless cycle. The discussion and above all the emotional undercurrents are hard to capture, but among the points of concern, and hope, are prospects that in September the United Nations will recognize Palestine as a state, the failures of the Quartet (the UN, European Union, the United States, and Russia) and the hopes and disappointments surrounding the role of the United States and President Obama.

Indian spirituality seems far removed from the troubling cycle of discussions about politics in the Near East, but the elements of wisdom evoked in the opening ran through the discussion. To situate and ground, in both realities and perceptions, is a first imperative. A second imperative, to participate, is the essence of the new revolution and the reengagement of people in shaping their future. And to act is also part of wisdom. So, the Forum is left with the challenge of its vision: can the “spirit of Fes” help in breaking the vicious cycle of hate and indifference? Can it restore human dignity to the stalemate and hurt? Can this blend of history and present, spiritual and material, help bring solutions?

On Tuesday, Fes Forum moved closer to home, plunging directly into a spirited discussion of the immediate realities facing the Maghreb. The large panel — nine participants — from Morocco, Algeria, Tunisia, and France, veered from history and reflections on the deeper causes that inspired and provoked the uprisings and demands for change to what all acknowledged was speculation about what will come next. Youth, women, employment, poor governance, and links between Europe and the Arab world were constant themes.

Despite the element of surprise, even shock, of what one participant characterized as an earthquake, a clear set of deeper causes lay behind the waves of reaction and action that followed the suicide of Mohamed Bouazizi in Tunisia. While each country is very different, there are important common threads. Today’s youth, the young people at the forefront of the incessant demands for change, are the product of demography: a baby boom that has tripled the region’s population in 30 years, the changing age pyramid accentuated by declining births. Thus youth have burst onto the scene demanding attention. Images and preconceptions to the contrary, the societies have been fundamentally feminized: women are there, and they want to share power and responsibility. In societies where community was a historical norm, the individual has emerged as an actor, not only in the visible Facebook and Twitter transformation but in what lies behind it, in human terms. Many recognize now that small groups can bring large changes. And the benefits of massive increases in education across the region, whatever its shortcomings, are apparent in a much broader and deeper political discourse and participation. A result is that all institutions, top to bottom, face new challenges. The conclusion? If people had looked behind the façade, the makings of revolution were quite apparent. Change was and is inevitable.

While Sunday’s discussions about Palestine and Israel spilled over into Monday’s reflections, still the absence of focus on that conflict belies the image of a region obsessed and blocked by the unresolved tensions further to the east. The question lingers and arouses passions and concerns, but it is not at the center. What is more immediate is the economy. Youth need jobs, a huge challenge that is not being met. The ultra-liberal free market model has not delivered. Neither has the trimming of the state that came with it. Better, not less, government is what is needed now.

Then on to the revolution itself and its character and its future. This revolution is proudly seen as non-violent at its heart, a rejection of old ideologies, whether of Marx or of Islamism. New values are emerging — shaped in part, Amel Arfaoui suggested, by the important role of women who challenge the paradigms of dominance and power of the past. The new generation is allergic to all forms of corruption. But against this hopeful picture, the counsel of wisdom obliges us to question how far this is truly a new kind of revolution, or pattern of social change, or will the historical patterns of hope, turbulence, anarchy, dictatorship emerge? The risks are real and great.

The role of Islam, Islamism, and Islamania (fear of Islam or, more truly, obsession) was woven through the discussion. The culture of Islam deserves as much focus as the politics of Islam, argued Veronique Rieffel. A hard new look at both culture and religion are essential, in Europe and in the Maghreb.

The revolution affects both the southern and northern banks of the Mediterranean and brings home both common interests and differences. Some of these differences have stymied the ideals of the Mediterranean Union project. But what is striking, the group argued, is the common interests. What young people everywhere want, Bariza Khiari emphasized, is really exactly the same. The hope is that the Arab spring can break through preconceptions — the old Orientalism that has colored and distorted Western images of the east, lending it both a passive and an aggressive character. There is hope in the new visions and understanding that are an essential part of the events of recent months. Linking north and south, Europe and the Maghreb and the Arab world, make sense and indeed such reinforced links essential for both. But there is plenty to debate: how far do these geographic spaces make sense as a central organizing principle? Where does a Mediterranean focus leave Iraq? The Baltic? Africa? Plenty of issues and obstacles emerged. However, a hard new look at what seems an eminently sensible and important idea, even a vision of rebuilding ties, is needed now more than ever.

The future? It will be difficult and there is much that is highly uncertain. It will surely be exhausting and demanding, yet full of hope and exhilaration. Civil society’s role and the establishment of a state of law and justice, including fair distribution of wealth, and building on the emerging pluralism, in many senses of the term, need to be at the center. Education and jobs need urgent attention and action. There is no option but to hope, for peaceful, intelligent, wise change. An alliance of positive forces can help avert the risks and shape a positive destiny. Nations, alliances, and solid regional groupings, one concluding remark emphasized, are forged far less by common elements and even interests but more by a common vision that unites across differences. The Arab Spring thus promises to this very diverse region the new position in the world that it has long desired and deserved. The region’s political leaders and its elites face great responsibilities, a collective challenge, and an opportunity to translate their ideals and promise into reality.