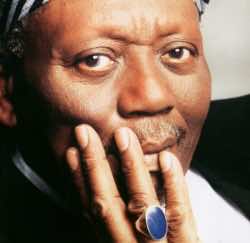 The American jazz pianist and composer Randy Weston once remarked to Culturekiosque’s late jazz editor Mike Zwerin, “What I like about Africa is its variety. Africa does not start south of the Sahara. There is as much African spirit in Ghana as in Morocco.” Having concertized and collaborated for over 50 years with North African musicians from Morocco to Egypt and deep into the Sudan, the six-foot-seven-inch tall  NEA Jazz Master’s contribution has not gone unnoticed. Last month, His Majesty King Mohammed VI of Morroco (b. 1963) honored Randy Weston for his lifelong engagement with Morocco and deep commitment to bringing Morocco’s Gnaoua music tradition to the attention of the Western world. The event took place in New York during the French Institute Alliance Française’s World Nomads Morocco Festival.

Randy Weston (b. 1926, Brooklyn, New York) was introduced to the world of the Gnaoua in the 1960s by Maâlem (master player) Abdellah El-Gourd who represents the Tangiers Gnaoua tradition. Born in 1947 in the Kasbah of Tangier, the Morrocan maestro transformed his traditional medina in Tangiers into a museum / institute for the instruction, practice, and promotion of Gnaoua culture. Mr. El-Gourd and Mr. Weston have collaborated together in concert presentations throughout the world including at an unprecedented concert at the Canterbury Cathedral in England.

The Gnaoua or Gnawa culture descends from several ethnic and language groups from ealy kingdoms or empires in West Africa, the ancient Sudan and the Southern Sahara. Brought to Morrocco by slaves, military conscripts and mercenaries, merchants and Islamic students some 500 years ago, Gnaoua culture is the result of war and conquest, the politics of appeasement among regional rulers and dynasties, the commerce of slaves, gold, ivory and the spread of Islam. Indeed, among the rich corpus of 243 songs that belong to the Gnaoua spirit invocation liturgy are those which chronicle the trauma and suffering of the long Trans-Saharan march of slave caravans. Their spiritual beliefs and complex liturgy are thus a mixture of pre-Islamic West African animism, Arabo-Berber and Muslim ritual that, with the passage of time, were absorbed into the Sufi brotherhood in Morocco. Their cultural influence, both sacred and profane, extended deep into Moorish Spain and Portugal.

Today, and despite a history of racial discrimination and injustice wherever they lived,  Gnaouans remain highly-regarded not only as ceremonial musicians and itinerant performers, but also as clairvoyant shamans whose powers are sought for healing and mediation in the spirit world. Through the Gnaouan’s intervention and knowledge of possession, trance music, ecstatic dancing and spirit-placation, the ancestral pantheon of spirits and saints can be accessed to counsel, heal and give strength to the living.

Some artists, musicians and scholars have already observed that many of the traditional West African beliefs and ritual practices found in the Carribean (Haiti, Cuba, Jamaica) and South America (Brazil, Peru) are similar to those of Gnaoua culture in Morocco due to their common ancestry in those areas of West Africa (Gulf of Guinea, Congo, Angola, Gold Coast, etc.)  most ravaged by the slave trade. This would perhaps also explain why the pentatonic melodies, robust syncopated rhythms, percussive playing style of large drums (tbel or ganga), metal double castanets (qaraqeb) and Gnawa bass lutes (sintar) have an immediate appeal to western musicians and audiences — already heavily influenced by the popular dance music of the West African diaspora in the Americas.

In 1992 Randy Weston recorded The Splendid Master Gnawa Musicians of Morocco (Verve) at the luxurious La Mamounia Hotel in Marrakech. “Some of them hadn’t seen each other in 40 years!…We lined the 9 masters according to age. We had the elders and it was a magic evening because, to their knowledge, never in the history of their culture have there ever been 9 hag’houges (guinbres) together with 2 percussionists. And each master sang his own song; after each one finished another continued”, Mr. Weston remarked about the recording project on his website. “Gnawa musicians believe that everyone has a color and a note to which he or she vibrates. Each individual responds to his or her chosen color and note as the healer musicians play the hag’houge.” The album would prove to be timely and historic as the two eldest master players would die within five months of the recording’s release.

Less well-known, but equally noteworthy, has been Mr. Weston’s work with the Moroccan master musicians of Jajouka.

Jajouka is an ancient village perched above a long valley in the Rif Mountains in northern Morocco. The village is home of the Master Musicians of Jajouka, as well as the sanctuary of Saint Sidi Ahmed Sheikh, who came from the East around 800 AD to spread Islam in the North of Morocco. The founding members of the village of Jajouka, the Attar family, maintain one of the oldest and most unique surviving musical traditions known on Earth. The music and secrets of Jajouka have been handed down through generations from father to son, by some accounts for as long as 1,300 years.

In addition to Morocco’s royal distinction and that of Jazz Master by the National Endowment for the Arts (2004) in the United States, Randy Weston is a 2011 recipient of the Guggenheim Foundation Fellowship in New York.  In 1998, he was named a Chevalier of the Order of Arts and Letters of the French Republic.