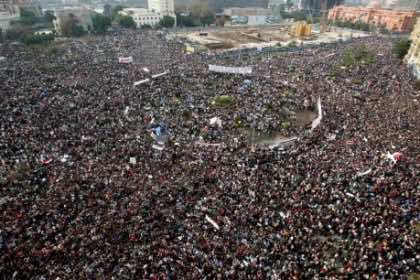 “A ruler can achieve power only with the help of his own people. They are his group and his helpers in his enterprise”  Ibn Khaldun, Al-Muqaddima, page 146.

The Tunisian and Egyptian chapters of the Arab freedom spring were mostly non-violent. However, the Libyan, Yemeni and Bahraini chapters are bloody at different degrees, and so is the Syrian. The stakes are different and when strategy forms an equation with democracy, freedom and human rights; a lot of blood is likely to be shed. Protesters’ blood is the fuel of revolution and we have seen it shed in Egypt and Tunisia and we will continue to see it until the last fortress of dictatorship is liberated. One thing is sure; the prophets of change will devise new ways to change the dictatorial regimes even when the clamor of cannons and the humming of fighter jets – like in Libya – overshadow the peaceful songs of freedom. However long the clamor lasts, it will cease and when the dust of the battlefield dissipates; the nonviolent revolutions will continue.

The Orient has always been the land of prophecies and prophets. It is the cradle of the three main monotheistic faiths and the locus of the holiest sites for the people of the book, and finally it is a land where the unexpected can happen or as a British official put it, it is “the Land of Paradox [where] grapes do grow from thorns and figs from thistles”. A lot has already been said, and much more will be said, about this Arab uprising spring and how it will be remembered in history for the future generations.

The winter of 2011 should be definitely called the early spring when “the Arabs came back to history”. One of these rare moments that ushered in a new era and marked a turning point in human history. When El Bouazizi set himself ablaze in a symbolic act of protest against the arbitrary powers of the lackeys of a small police state, his helpless self-immolation act set a whole world on fire. Through his self-immolation on the altar of freedom, El Bouazizi confirmed the heroic precedents in human history when helplessness turned into a driving force for rebellion against despotism and the reign of terror. It also turned out to be – sad as it was – an inspiring moment for a generation of prophets and prophetesses of change in the Arab world. Helplessness is transformed from a moment of defeat – because of fear – to an opportunity for liberation from the fear of dictatorship and from the dictatorship of fear.

This self-immolation, and the ensuing changes in the region – from the toppling of Ben Ali, the ouster of Mubarak, and the armed uprising in Libya to the ignition of the fires of revolt in the Gulf States—are reminiscent to us of the fires set by the new prophets on the perverted values of their societies. Is not the essence of prophecy – and religion by extension – the redemption of human beings from the yoke of injustice imposed on them by their corrupt leaders and deviant traditions? These latter furnished the legitimacy for injustice, disrespect of human beings and the reign of the fittest who managed to survive in this weak unfriendly environment. The perverted “values” of dictatorship – that have been ingrained in Arabic societies through a well-crafted process – needed new prophets to be uprooted. Because of their earthquake effect on the status quo and their everlasting change whose far-fetching effects will extend to tens – if not hundreds – of years, comparing these Middle Eastern Revolutions to the revelation of a new religion and the drowning of the Pharaoh in the Red Sea would not be an exaggeration.

The Pharaoh is a very symbolic figure in Arab-Islamic culture. He symbolizes hubris, defiance to God and injustice towards his people. He also symbolizes the ruler’s predisposition to misuse might to inflict injustice on his people if moral considerations fail to bridle his whims. The Arab dictatorships share the same Pharaonic mode of operation. The same way the people of Egypt needed a prophet to liberate them from the Pharaoh, so do the Arabs these days to be liberated from their illegitimate rulers. The Pharaoh drowned in a miraculous way by God in the Red Sea while our many Pharaohs are drowning these days in the Liberation Squares of the Arab world. Their hubris and contempt for their people, topped by a strong belief in military might; and rampant injustice during their rule is tempting us to consider every dictator a Pharaoh.

The Pharaoh used the powers vested in him to subjugate his people, torture them and establish the cult of the person, and so do the Arab rulers and their families thousands of years later. Whenever a despot is deposed, we should be thankful to the young prophets of change for their determination to spread the call. A call for a new religion in which the human will and determination are seminal in shaping the political and social orders in the Arab world. A world whose people consider democracy, freedom, human rights, the rule of law and respect of human dignity the corner stone of their entry to modernity. A modernity that forms a prelude to the secular state where all citizens are treated on the foot of equality.

The new prophets do not pretend to have received a revelation from God. Their revelation has been evolving through the pain and tribulations of their co-citizens. It is the culmination of witnessing years of disastrous undemocratic policies implemented by the dictators and their clients in a deliberate action to humiliate their people. Suffering from injustice, disregard and disrespect in their own countries and in the hands of their co-citizens is the loudest call that awakened these prophets. There is no stronger revelation than witnessing the servitude of whole nations under different appellations. A servitude based on different bogus legitimacies among which the people’s free will is excluded. They grew up seeing the Arab countries, from the Atlantic Ocean to the Persian Gulf, being turned into personal farms of the dictators and members of their families. They saw the exclusion of the bulk of society from sharing the economic opportunities in their countries. They are inspired by the accumulation of human knowledge and experiences of non-violent action that have shaken mightier and stronger empires through history. Arab revolution prophets are nothing but human beings driven by a deep understanding that human will is stronger than the might of dictators, and that the culture of citizenship and accountability should outweigh the culture of nepotism and allegiance. Our new prophets wrote their holy scriptures with their blood and the resounding flames of their souls on every nook and cranny in the hollowed Tahrir Squares of countries.

Adopting nonviolence as a means to effectuate the political change in the Arab world was enough to make the world—especially the citizens of Western countries despite the existence of fears—rejoice and endorse the Arab youth’s “legitimate aspirations for change”. The Middle East and Middle Eastern people have always been unjustly portrayed as being violent and resorting to terrorism to advance their causes. However, the Arab youth understand the high moral standing of nonviolent action to achieve their goals. When violence and nonviolence clash, nonviolence always has the upper hand given its higher moral standing.

Nonviolence has not only proved its validity as a way to topple injustice but it also established itself as the weapon of the weakest. When people disobey, the oppressors become extreme but they finally come to realize that the will of the people is stronger. The beauty of nonviolence, adopted by the Arab prophets of change, is in the support they managed to garner in the West for their legitimate requests. Adopting a universal discourse, understood by all sectors of society across cultures, was instrumental in drawing the attention to this young generation of Arabs who were presenting an image totally different from what the Arab and Muslim stood for in the Western imagination. They understand that advocating efficiently for your legitimate causes is as important as the cause itself. This is the first time in the Arab history; an Arab cause is taken by a serious lawyer: the people.

These young leaders have no communication barrier nor do they know borders. They have acquired the necessary fluidity to represent the authenticity of their societies hand in hand with their aspiration for a modern society built on the values of citizenship. They proved that they can be Arab and Muslim and also democrats. They prove everyday that Samuel Huntington and Francis Fukuyama were wrong. Middle Eastern people harbor no inherited antagonism against universal and Western values. Their message is inclusive of everyone because it simply speaks the truth that all human beings crave. How can we not be moved by the pictures of thousands of young females and males brandishing the most beautiful banners advocating freedom of speech, end of torture, and institutionalization of the accountability culture?

Their songs of freedom whose lyrics resonate with everyone’s heart beats and rhyme with anyone who harbors a dream of freedom, added a celebratory spirit to their message. Their Oriental fertile imagination snatched this historical moment to offer the world an epic of peaceful change that shows – if anything – that political change cannot be imposed on other people from the outside. They showed – after the fact – that many wars could have been avoided and many people could have been saved had people in the Middle East been given the opportunity to change their regimes without foreign intervention. Tanks and bombs bring destruction; sow the seeds of discord in societies in addition to protracting the conflicts. When the initiative comes from the people, they make change and they make it work.

revolution and we have seen it shed in Egypt and Tunisia and we will continue to see it until the last fortress of dictatorship is liberated. One thing is sure; the prophets of change will devise new ways to change the dictatorial regimes even when the clamor of cannons and the humming of fighter jets – like in Libya – overshadow the peaceful songs of freedom. However long the
Our fear is that the foreign intervention in Libya might jinx the Arab people’s dream of a better and just Arab world. We cannot just erase the painful residues of the past and recent failures of the foreign interventions in the Arab countries with the stroke of a pen. However, these revolutions might be an opportunity for Western governments to establish a new relationship with the Arab countries to atone for their pernicious cooperation with the dictators against Arab people’s interests during the last fifty years. This should be a new dawn for the Arabs and the West altogether.