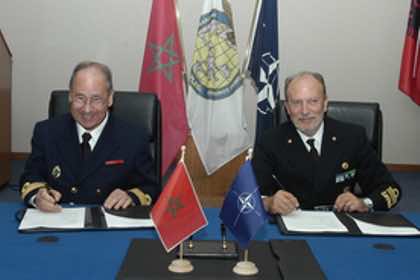 “We made progress together in our political dialogue and our practical cooperation,” Brengelmann said at a joint press  briefing with the Foreign Ministry’s Secretary General Youssef Amrani, following the end of a meeting of the Morocco-Nato Working Group.

Brengelmann added that relations between the two parties are based on strong foundations. “NATO appreciates Morocco’s contribution to peace keeping operations led by the Organization, such as those of the Balkans.”

The NATO official also highlighted that cooperation with Morocco is extended to crises management, scientific cooperation, and the fight against terrorism.

NATO’s new partnership policy will be “more flexible and will benefit bilateral cooperation with Morocco, notably within the framework of a multidimensional relation between the two parties,” Brengelmann said.

On the same occasion, he congratulated Amrani for his appointment Secretary General of the Union for the Mediterranean (UfM).

Amrani, for his part, said the working group meeting tackled cooperation prospects in light of the NATO’s New Strategic Concept and the Organization’s new partnership policy.

The meeting, he said, examined the progress of the multidimensional relations between the two parties and the means to reinforce political dialogue and practical cooperation.

In this regard, Amrani voiced satisfaction with the convergence of views concerning several issues of common concern including regional peace and security, dialogue and practical cooperation between Morocco and NATO.

Brengelmann visit to Morocco is part of a tour that includes other countries parties to the Mediterranean dialogue.