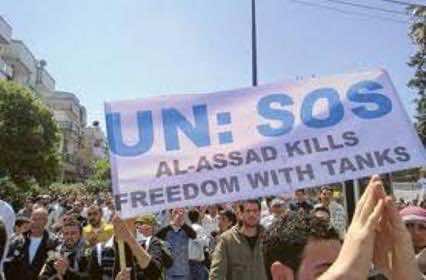 Syrian tanks sealed a restive northern city Saturday, and activists said they expected an all-out government assault on the region near the Turkish border.

President Bashar Assad has sent heavy armor, including tanks, and thousands of troops to the region as he struggles to crush a nearly three-month uprising against his family’s 40-year rule. Human rights groups say more than 1,300 people have died in the government crackdown.

The military operation in the mostly deserted town of Jisr al-Shughour is in response to what the government claims were attacks by “armed groups” that killed more than 120 officers and security personnel. Refugees reaching Turkey said the chaos erupted as government forces and police mutinied and joined the local population against Assad forces.

Syrian state television on Saturday said army units arrested several leaders of the alleged armed groups in the area of Jisr al-Shughour, a city of about 40,000. About 80 percent of the population has fled, with more than 4,000 Syrians taking sanctuary across the Turkish frontier.

Syrian troops backed by dozens of tanks have been operating in the area for several days, securing towns and villages on their way to Jisr al-Shughour.

Undaunted by the continuing and brutal crackdown, protests extended to every major city Friday, and activists said 36 people were killed when security forces opened fire during demonstrations across the country. The dead included 20 from the northern Idlib province, home to Jisr al-Shughour.

Twenty-five miles (40 kilometers) to the southeast in the town of Maaret al-Numan, thousands of protesters overwhelmed security forces and torched the courthouse and police station. The army responded with tank shells, a Syrian opposition figure told The Associated Press by telephone, speaking on condition of anonymity, fearing retribution.

Backed by helicopters and tanks, the troops responsible for most of Friday’s violence were believed to be from an elite division commanded by Assad’s younger brother, Maher. The decision to mobilize his unit against the most serious threats to the Assad regime could be a sign of concern about the loyalty of regular conscripts.

Syria’s brutal crackdown has angered the leader of neighboring Turkey, who accused the Assad regime of “savagery.”

A Turkish official at Altinozu on the Turkish side of the border said capacity was near full at the camp there and newcomers would be taken to a third camp at Boynuyogun. Workers on Saturday were putting the final touches to the camp there, welding fences around the camp and laying power lines.

“We don’t expect the inflow to end rapidly. The news we are hearing is that there are more people waiting to get in on the other side,” said UNHCR spokesman Metin Corabatir.

In an interview with Turkey’s NTV television late Friday, Turkish Prime Minister Recep Tayyip Erdogan said he would discuss events in Syria with Assad “in a very different way” after Turkey’s general elections on Sunday. Erdogan has hardened his tone against the Syrian regime, accusing Maher on Thursday of “chasing after savagery.”

Turkey has vowed to keep its border open to fleeing refugees.

Confirming information out of Syria is difficult. Communications are cut in areas where the uprising is strongest. Syrians who speak openly face retribution from the regime, and foreign journalists have been expelled.