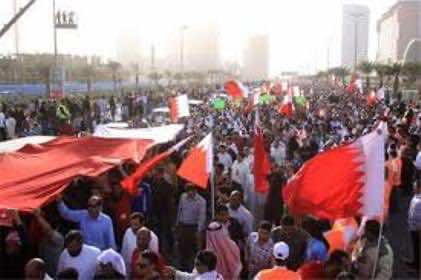 A government report says the U.S. approved $200 million in military sales from American companies to Bahrain in 2010, months before the pivotal Persian Gulf ally began a harsh crackdown on protesters.

The U.S. had green-lighted $88 million in military exports to Bahrain in 2009.

Much involved aircraft and military electronics, but the U.S. also licensed $760,000 in exports of rifles, shotguns and assault weapons in 2010. Since mid-February, the kingdom has confronted demonstrators with cordons of armed military and police firing live ammunition. At least 31 people have died and hundreds more injured in the clashes.

The possibility that American-built weapons might have been used against protesters has raised questions in Congress and led the department to review its defense trade relationships with several Middle East nations.

Some transactions are on hold and the review has broadened into a policy reassessment that could alter U.S. defense trade oversight.

The State Department’s Directorate of Defense Trade Controls approved more than $34 billion in total exports from American defense companies to foreign governments in 2010. That compares with $40 billion in 2009.

The total details only proposed sales, not actual shipments. It’s a reliable gauge of private sales of everything from bullets to missile systems, but doesn’t include direct defense shipments from the U.S. to its allies.

The Obama administration has criticized the use of violence against dissenters by police and military units but has not exacted specific repercussions against Bahrain’s government.

A military attache at the Bahrain Embassy in Washington would not detail the country’s contracts with U.S. defense companies and referred a reporter to the State Department.

Department officials would not discuss specifics of the military exports to Bahrain.

Among Bahrain’s recent military moves, the Congressional Research Service reported last March, were upgrading its small fleet of F-16 fighter jets and adding to its inventory of American-made helicopters.

A department official said that following recent clashes between Bahrain government forces and pro-democracy crowds, the U.S. would review Bahrain’s use of security and military units against peaceful demonstrators and “will take into account any evidence of gross violations of human rights.”

Assistant Secretary of State Miguel Rodriguez told Sen. Patrick Leahy, D-Vt., in a letter that the administration would re-evaluate its procedures for reviewing American security assistance and “has specifically included Bahrain in this reassessment.”

Anthony Cordesman, national security analyst with the Center for Strategic and International Studies, a centrist think tank in Washington, said the $760,000 in small arms licensed to Bahrain by the U.S. in 2010 was a pittance compared with what was sold in recent years to Mideast countries by European defense companies.

“Most of the equipment that Bahrain and other Mideast nations buy to deal with internal dissent is bought overseas because of U.S. restraints on its own exports,” Cordesman said. “It’s a fruitless exercise to concentrate on American exports with all the amount of available small arms floating around the world.”

Jeff Abramson, deputy director of the Arms Control Association, countered that the “U.S. needs to be responsible for its own actions first.” He added that the political upheaval across the Mideast “has brought to light the problems of providing arms to repressive regimes. The hope is we’ll now begin to see a rethinking of the willingness to do that.”