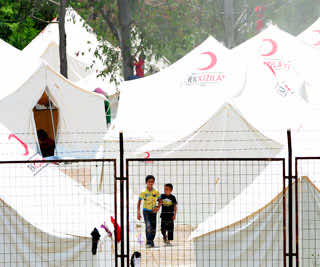 More than 4,000 Syrians have fled to Turkey to escape a crackdown on protests against President Bashar al-Assad and thousands more are sheltering near the border, officials and activists said on Saturday.

Fearing revenge from security forces for clashes in which authorities said 120 troops were killed this week, the refugees streamed out of the northern town of Jisr al-Shughour ahead of a military operation launched by the army there on Friday.

A senior Turkish diplomat said 4,300 Syrians had crossed the border and that Turkey was prepared for a further influx, though he declined to predict how many might come.

“Turkey welcomed a great many number of guests in the past in their times of most dire need. We can do that again,” Foreign Ministry Deputy Undersecretary Halit Cevik was quoted as saying by state-run Anatolian news agency.

Refugees could be seen walking around the grounds of a camp at Boynuyogun where tents have been pitched inside an old hangar, and another camp at Yayladagi has been established in the grounds of a disused tobacco company.

At a third site, set up in fields close to the border but so far still empty, workers carried beds into tents on Saturday.

Radikal newspaper said Turkey would establish a buffer zone if migrant inflows from Syria exceed 10,000. Just inside Syria, thousands more people were gathering close to the frontier, according to an activist helping coordinate the movement of refugees.

“The border area has turned practically into a buffer zone,” said the man, who identified himself only as Abu Fadi. “Families have taken shelter under the trees and there are 7,000 to 10,000 people here now.”

Thirty-six protesters were shot dead across Syria on Friday, activists said. Syrian authorities deployed helicopter gunships in the town of Maarat al-Numaan, they added, in the first known use of air power against unrest.

The government, which has blamed violence in the protest wave on “terrorists”, said on Saturday the army had arrested two armed groups in Jisr al-Shughour after launching operations there in response to requests from residents. The state news agency SANA said they seized guns, explosives and detonators.

SANA also said that a group of journalists and photographers came under fire on Saturday from “terrorist groups” at the entrance to the town, but that none were wounded.

Some activists and residents said the fighting earlier in the week in Jisr al-Shughour was between members of the security forces after some mutinied over orders to shoot at protesters, and that many of the dead were civilians caught in the clashes.

Damascus has banned most foreign correspondents from the country, making it difficult to verify accounts of events.