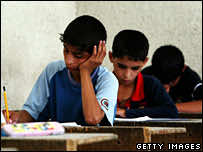 The causes of the recent revolutions in the Arab world are numerous and complex, and certainly cannot be attributed to one factor. Many experts spoke about the big role that social media played as well as the deep-seeded frustrations with corruption, state legitimacy and foreign policies.

However, one tipping point that experts have focused on is demographics– specifically, the youth bulge. Nearly one-half of the population of the Middle East and North Africa is under the age of 20 and high rates of unemployment (25 percent) among 15 to 24-year-olds in the region continues to be of huge concern. While access to education is an essential pathway out of poverty in many countries, in Morocco and Algeria, university graduates are less likely to be employed than their peers who have only completed primary or secondary school. In Egypt and Bahrain, those with a secondary school education have higher rates of unemployment than their peers with just primary school educations.

Education has played a complex role in the uprisings in the Middle East and North Africa. Many commentators note that educated youth have played an important role in what has come to be called the “Arab spring.” However, what they fail to mention is that spending many years in school has failed to give many Arab youth a good education. These revolutions were not propagated by well-educated youth; these uprisings were spurred by the needs and demands of poorly educated youth, whose knowledge and skills do not meet the demands of a rapidly-advancing world. Arab governments generally have allocated a significant portion of their national income to education; Djibouti, Tunisia, Morocco, Saudi Arabia, and Yemen each spend more than 5 percent of their gross national product on education. This has led to significant progress toward universal access to school; the regional gross enrollment ratio in primary school in 2008 was 96 percent (although the gender disparity is worth noting, with boys at 100 percent gross enrollment rate and girls at 91 percent). Ninety-seven percent survive to the last grade of primary school and then 95 percent of those transition to secondary education. Yet, there has been very low return on investment in terms of meaningful educational outcomes. Education systems throughout the region are hindered by low quality, irrelevancy and inequity:

Low Quality. Internationally comparable reading test scores at grade 4 show that, in Kuwait, Qatar and Morocco, over 90 percent of the students scored lower than the minimum benchmark, which indicates that these students have not acquired basic reading comprehension after at least four years of schooling. The results do not improve overtime either. Math and science scores for grade 8 show that the majority of students in Algeria, Egypt, Saudi Arabia, Syria and Qatar are below the minimum threshold. These students lack a basic understanding of whole numbers, decimals and simple graphs. According to Kevin Watkins, education systems in the Middle East and North Africa are plagued by: teachers who are poorly trained, as well as poorly regarded in society; an emphasis on rote learning over critical thinking; and curriculum that seeks to train students to either work in the public sector – where the number of jobs are quickly diminishing – or continue onto post-secondary education, which most students are not able to do for a myriad of reasons.

Irrelevancy. This mismatch of skills learned in school and those needed in the workplace has led to the proliferation of “waithood,” which refers to the increasingly common period of time that Arab youth have between graduation and getting their first job. Part of the unemployment problem is supply since these countries are not generating enough skilled jobs to absorb the increase in the educated labor force. But the other half of the problem is preparing young people with the necessary skills for jobs available. This is dependent upon the quality and relevancy of the education provided, particularly in the post-primary years. Research linking education to employment for Arab youth shows that one-third of them cannot do basic arithmetic and two-thirds of them self-reported that they didn’t have the skills they needed to get a good job. Education systems are largely preparing students for employment in government bureaucracies where there is little job opportunity but not for the range of private sector work available.

Inequity. Although the attention in recent months has focused on the educated youth in the Arab world, there are still millions of children from poor households who are out-of-school. Their educational needs and rights cannot be ignored. This region also has some of the largest gender gaps with boys’ enrollment and completion often far exceeding that of girls. In Egypt, girls from poor families living in the rural Upper Egypt region are doubly disadvantaged; half of them receive fewer than four years of schooling and one-quarter of them have fewer than two years of schooling.

There is clear need for the Arab World and the broader global community to focus on the quality, relevancy, and equity of educational opportunities, particularly during adolescence. This is highlighted in the Center for Universal Education’s new report “A Global Compact on Learning: Taking Action on Education in Developing Countries.” Improving learning outcomes and education quality will require concerted focus and collective action. First, young children must get an early start on learning in life with quality early childhood development programs. Second, children must learn basic literacy and numeracy skills in the lower primary grades in order to continue and succeed in school. Third, young people must complete primary school and have access to educational opportunities that equip them with the necessary knowledge and skills to live safe, healthy and productive lives.

The emergence of a global learning crisis and waning international support for education lead us to call for a new Global Compact on Learning that provides a broad framework and a series of targeted actions to improve learning opportunities and outcomes for all children and youth, especially the most marginalized. The Global Compact seeks to mobilize the international community – including developing and developed country governments, multilateral actors, private sector foundations and businesses, and local and international civil society – to put learning at the center of the global education agenda. Bold action and commitment are needed from all groups working together to embrace the following six principles:

• Leadership from developing and developed countries, as well as from heads of foundations, corporations and NGOs, must deliver and act on one clear consistent message: that learning matters for all children and youth, even the hardest to reach.

• Partnership among actors committed to improving learning in the developing world must leverage efforts to maximize the impact and ensure that everyone is pulling in the same direction.

• Financing is needed to achieve learning for all, which means that more resources must be dedicated while existing resources are used more effectively.

• Measurement of learning achievement in a way that can track progress against existing disparities and provide useful and timely insight for classroom-level practices is essential to fulfilling these goals.

• Advocacy that mobilizes public opinion to send strong signals to governments on the importance of learning for all and then holds those governments – developing and developed – accountable for the results.
• Building evidence to answer remaining questions about how to improve education and then using that information to scale up proven solutions for tackling the learning crisis.
Quality education and learning alone won’t eliminate all the concerns of the youth protesters in the Middle East. But without greater attention to the real issues related to quality, relevancy, and equity in the education systems of these countries, the youth bulge that is estimated to reach 100 million by 2035 will become an opportunity for a prosperous future rather than a challenge.