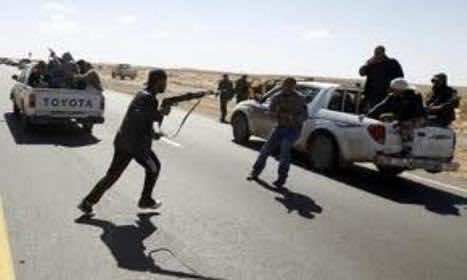 Heavy fighting between troops loyal to Libyan leader Muammar Qaddafi and rebels broke out in a city just 160 kilometers (99 miles) east of Tripoli, potentially opening the coastal road to the capital, just as cracks appeared among NATO allies.

Colonel Qaddafi’s forces also shelled for the first time the world heritage-listed city of Gadamis, some 600 kilometers (373 miles) southwest of the capital on the Tunisia and Algerian border, opening a new front in the five-month long civil war.

Ahmed Bani, a military spokesman in Benghazi, told Reuters clashes had broken out in Zlitan on Thursday and resumed on Friday with Gaddafi forces killing 22 rebels.

Zlitan is one of three towns that are under government control between the rebel-held Misrata and the capital and were it to fall could act as a stepping stone to allow the anti-Gaddafi uprising to spread from Misrata, the biggest rebel outpost in western Libya, to Colonel Qaddafi’s stronghold in Tripoli.

“Large numbers of troops are surrounding Zlitan from all directions and are threatening its residents with having their women raped by mercenaries if they do not surrender,” Mr. Bani said, adding the rebels controlled parts of the city.

Rebels also said the oasis town of Gadamis with a population of about 7,000 people, mainly Berber, was under attack after an anti-government protest in the old Roman city on Wednesday.

“Gadamis is being shelled by Qaddafi forces, according to witnesses in the town,” spokesman Juma Ibrahim said from the rebel-held town of Zintan in the Western Mountains region.

“This is retaliation to anti-regime protests,” he said.

The old town was de-populated by Colonel Qaddafi in the 1990s and its inhabitants moved into modern buildings. It was not clear if the attack targeted the old town, a labyrinth of narrow, underground passages and houses known as the “Pearl of the Desert”.

The accounts in Zlitan and Gadamis could not be independently verified and the Gaddafi government did not immediately comment.

In the besieged port city of Misrata, a doctor at the Hekma hospital said 31 people were killed and 110 wounded in government shelling on Friday.

The fighting comes after the United States accused some NATO allies on Friday of failing to pull their weight in the campaign against Muammar Qaddafi’s forces, as the Libyan leader kept up shelling of the rebel-held town of Misrata.

“The mightiest military alliance in history is only 11 weeks into an operation against a poorly-armed regime in a sparsely-populated country — yet many allies are beginning to run short of munitions, requiring the US, once more, to make up the difference,” US Defense Secretary Robert Gates said in a valedictory speech at NATO headquarters in Brussels.

Mr. Gates painted a bleak picture of the state of the 28-nation transatlantic alliance, saying it risked a “dismal” future after years of shrinking budgets that were leaving them short of munitions in the Libyan air war.

Mr. Gates acknowledged that the Libyan mission has met its initial military goals of grounding Colonel Qaddafi’s air force and limiting the regime’s ability to launch attacks against civilians.

But he said many allies lacked intelligence and surveillance aircraft and specialists, which meant the US military had to step in to ensure that allied fighter jets could identify and strike targets.

Secretary of State Hillary Clinton, in Africa for trade talks, moved to soften the rebuke, saying the outgoing Pentagon chief’s remarks “underscored how this alliance, the greatest alliance in history, cannot get complacent.”

“We all have to step up and share the burdens that we face in responding to 21st century threats. Many members are doing just that,” she said, acknowledging that the United States and its NATO allies are all under “financial pressure,” she said.

Mr. Gates’s exasperation has been echoed by rebels, who control the east of the country and some other areas but do not appear to pose an imminent threat to Colonel Qaddafi’s rule.

Turkey, which is a member of NATO, said Colonel Qaddafi had no way out, but to leave Libya and offered him an exit.

“We ourselves have offered him this guarantee, via the representatives we’ve sent. We told him we would help him to be sent wherever he wanted to be sent. We would discuss the issue with our allies, according to the response we receive. Unfortunately we still haven’t got a response from Qaddafi.”

Under pressure to come up with plans for a transitional government while still in disarray, the rebels have said the onus is on foreign powers to hasten assistance.

“Our people are dying,” rebel Oil and Finance Minister Ali Tarhouni said. “So my message to our friends is that I hope they walk the walk.”

Mr. Qaddafi describes the rebels as Al Qaeda terrorists and says foreign intervention is a front for a grab at the country’s oil.

Mikhail Margelov, Russia’s Africa envoy, who travelled to Benghazi on Friday, said he would go to Tripoli as soon as NATO provided a corridor through its Libyan no-fly zone.