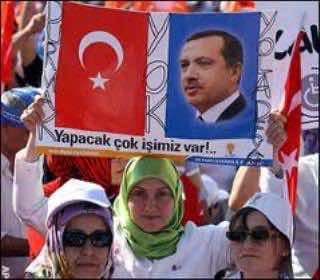 Turkish Prime Minister Tayyip Erdogan’s ruling AK Party won a parliamentary election with nearly 50 percent of the vote on Sunday, but failed to win enough seats to call a referendum on a planned new constitution.

A Muslim democracy and candidate for the European Union, Turkey has become an economic powerhouse and influential player on the global stage since Erdogan’s AK Party first swept to power in 2002.

The AK will be forced to compromise with other parties to press on with plans to replace the existing charter, written almost 30 years ago during a period of military rule.

Preliminary results based on 99.7 percent of the vote show AK winning 49.9 percent, or 325 seats, just below the 330 required for a plebiscite and less than the 331 of the 550 seats it had in the last parliament.

The slip will take some of the gloss off the AK success in winning a third consecutive term and four more years of single-party rule, but analysts reckoned it would be good for both the economy and democracy in Turkey.

“It seems the election outcome is heading toward the best-case scenario for the markets: a solid majority for AKP but short of the 330+ seats required to amend the constitution and put it to a referendum,” said Wolfango Piccoli, an analyst at Eurasia Group risk consultancy in London.

The result boosted the lira currency in early Asian trade, and analysts expected to see further gains against the dollar.

“Falling short of 330 seats, the AKP would be forced to enter into negotiations with the opposition for the desired changes: a scenario that should help to limit the risk of further polarisation,” Piccoli said.

AK supporters celebrated regardless, honking horns and waving flags as they drove around towns across the country.

Kemal Kilicdaroglu, who gave the CHP new direction when he took over leadership of the party last year, said it was the best showing by the party of Mustafa Kemal Ataturk, the founder of the Turkish republic, since a military coup in 1980.

“We wish all success to AKP, but they must remember there’s a stronger main opposition party now,” he told CHP supporters.