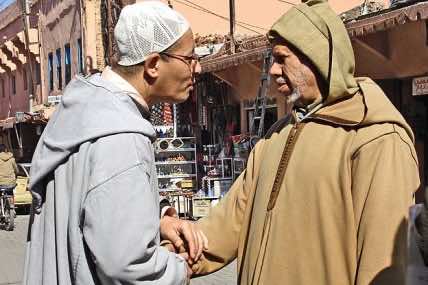 During a two-week visit to the North African Kingdom of Morocco, there have been music festivals of international grandeur, royal inaugurations of development projects and soccer celebrations across the country. The events widely publicized in the national broadcast media conveyed an image of normalcy being enjoyed by a country situated in a region swept by revolutions and social unrest.

But this type of publicity is often described by ordinary people as part of an official policy known as “goulou al-aam zeen” (Say the year is good!). This policy, people say, imposes a blackout on what the “Makhzan”—a word used to refer to the ruling establishment—sees as the kingdom’s dark side, which if brought to light could spur unrest, hurt the economy and the image of the regime abroad.
Indeed, there have been many more developments in the kingdom but these have received comparatively little media attention despite their high newsworthiness. There have been pro-democracy protests all over the country, brutal security crackdowns, and quasi paralysis in the sectors of health, education, judiciary and fisheries due to repeated nationwide strikes. Even the imams leading religious prayers in mosques have taken to the streets for the first time to demand better treatment by the government.

King Mohammed VI, the commander in chief of the armed forces and the “commander of the faithful,” distances himself from those problems, leaving an incapable government to deal with them. He appears on the national TV channels to highlight achievements and to deliver beautiful tidings. Watching the national media it takes no brilliance to recognize that the “good things” are attributed to the king and the “the bad things” are attributed to the government and to “radical elements” of the civil society. But regardless of who does what, the national broadcast media often highlight three active parties in the Morocco’s political scene—the king, the government and the civil society. The “makhzan”—or the hidden hand is never a player in the game.

At the time of writing hundreds of school teachers across the nation are in an open strike. They describe themselves as prisoners in “cell number nine.” Most of them have spent years in “grade nine” and have never been promoted to “grade 10” at a time when the ministry of education occasionally recruits waves of unemployed graduates straight to grade 10.

According to the law, a person first has to undergo a period of training as a teacher before he or she can be sent to class but the minister of education has issued exceptions to unemployed graduates constantly demonstrating before the parliament and government buildings and placed them in grade number 10, thereby angering teachers who have undergone training and still in grade number nine. Was the education minister not aware that his decision would plunge his sector into turmoil? A few teachers who spoke with the writer said it was impossible that the minister was not aware of his wrongdoing but that he had “no choice.”

“Our ministers have no choice, they do what they are asked to do and shut up even if it is wrong. When a problem breaks out in a government sector, the responsible minister can only wait for a call from the hidden man of the makhzan to tell him what to do,” a school teacher said.

Today there is much talk about a new constitution, the separation of powers and the institution of a system of regionalism that seeks to buttress local governance. Some people say the new reforms will take the nation to new heights in democracy building. Others cast a jaundiced eye on the anticipated reforms saying what the country needs most is strong law enforcement on all without exceptions.

On Friday, June 10, a columnist at Al Massae newspaper, whose executive editor was recently handed a one-year jail term for “criticizing the performance of the security forces,” asked whether it was acceptable for the interior ministry to crackdown on unauthorized peaceful demonstration demanding reforms while allowing another unauthorized demonstration to celebrate a soccer victory—a legitimate question that highlights a law enforcement problem.