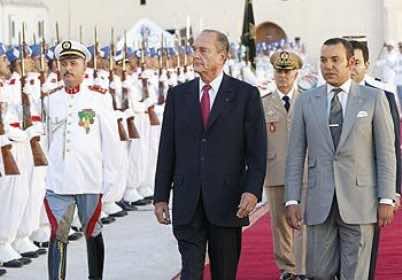 Former French President Jacques Chirac said that the monarchy “remains the sole guarantor” of stability in Morocco and reiterated the fact that the Sahara is Moroccan, the Maghreb Arabe Presse news agency has reported today.

“In my opinion, the monarchy remains the sole guarantor of stability in Morocco,” wrote the former French Head of State in his book Le temps Présidentiel, Mémoires (Presidential Time, memoirs).

Staying true to his position on the Sahara issue while President of France, Chirac went on to say that he is “supporting Morocco’s point of view” on the Sahara, “as an integral part of the Kingdom”.

Highlighting a meeting with HM King Mohammed VI in Johannesburg in 2002, Chirac commended the “political openness” of the Sovereign, considering that it is the most efficient way to maintain the stability of the country.

In his book “Le temps présidentiel, Mémoires”, which has been just published in France, Chirac recalled the particular links he had with the Royal Family, adding that HM the King Mohammed can, as his father the late King Hassan II, count on his friendship in all circumstances.