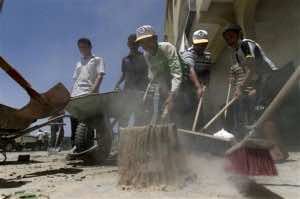 Libyan rebels Monday broke out toward Tripoli from the opposition-held port of Misrata 140 miles to the east, cracking a government siege as fighters across the country mounted a resurgence in their four-month-old revolt against Moammar Gadhafi.

The rebels gained a diplomatic boost as well when the visiting German foreign minister said the nascent opposition government was “the legitimate representative of the Libyan people.” Guido Westerwelle was visiting Benghazi, the capital of the rebel-held east of the country, to open a liaison office and hand over medical supplies.

He stopped short of full diplomatic recognition of the Transitional National Council, as has the United States, awaiting the ouster of Moammar Gadhafi from his more than 40-year rule in the oil-rich North African country.

Germany has refused to participate in NATO airstrikes in Libya and withheld its support for the U.N. resolution that allowed the attacks.

What started as a peaceful uprising against Gadhafi has become a civil war, with poorly equipped and trained rebel fighters taking control of the eastern third of Libya and pockets of the west.

But the fighting had reached a stalemate until last week when NATO began the heaviest bombardment of Gadhafi forces since the alliance took control of the skies over Libya under a U.N. resolution to protect civilians from Gadhafi’s wrath. NATO has been pounding Gadhafi military and government position with increasing vigor and the rebels are again on the move.

Gadhafi’s power has been considerably degraded by the NATO attacks as well military and government defections.

In London, Libyan analysts reported Monday that Gadhafi had lost another close official who defected and fled the country.

Sassi Garada, one of the first men to join Gadhafi when he took power, left Libya through Tunisia, according to Noman Benotman, a Libyan analyst in London who was in contact with his friends and family. Guma el-Gamaty, U.K. organizer for Libya’s interim council, also confirmed the defection.

There were initial reports that Garada fled to Britain, where he has several family members, but Benotman said Garada was in Switzerland.

British officials, who spoke on condition of anonymity to discuss immigration and security matters, said they could not confirm whether Garada was in the U.K. Swiss Foreign ministry spokeswoman Carole Waelti told AP the government was “not aware of the possible presence of Mr. Garada in Switzerland.”

Garada reportedly passed up several military promotions over the years to stay out of the limelight and serve Gadhafi, said Benotman, who works as an analyst for the London-based Quilliam Foundation.

It is not known why Garada defected or when, but he is one in a growing list of senior officials who have fled the country, suggesting Gadhafi may be losing his grip on power.

In the major fighting near Misrata on Monday, an Associated Press photographer at the rebel front lines said they had pushed along the Mediterranean Sea to within 6 miles (10 kilometers) of Zlitan, the next city to the west of Misrata. A rebel commander said his forces, using arms seized from government weapons depots and fresh armaments shipped in from Benghazi, planned to have moved into Zlitan, by Tuesday.

Ali Terbelo, the rebel commander, said other opposition forces already were in Zlitan, trying to encircle Gadhafi troops. If the rebels take the city they would be within 85 miles (135 kilometers) of the eastern outskirts of Gadhafi’s capital, Tripoli.

An AP reporter with rebel forces said shelling was intense Monday morning with rockets and artillery and mortar shells slamming into rebel lines west of Dafniya at a rate of about seven each minute. Dafniya is about 20 miles (30 kilometers) west of Misrata.