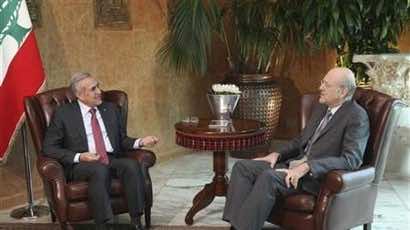 Lebanon’s Prime Minister Najib Mikati announced on Monday a long-delayed government dominated by Iranian-backed Hezbollah and its allies, which is likely to cause alarm among Western powers at a time of regional turmoil.

Formed after five months of political stalemate, the new Lebanese leadership was welcomed by President Bashar al-Assad of neighbouring Syria, another Hezbollah sponsor now beset by international censure of its crackdowns of anti-regime protests. “This government is committed to maintaining strong, brotherly ties which bind Lebanon to all Arab countries, without exception,” Mikati said at the Baabda Presidential Palace.

“Let us go to work immediately according to the principles … (of) defending Lebanon’s sovereignty and its independence and liberating land that remains under the occupation of the Israeli enemy.”

Mikati was appointed after Hezbollah and its allies toppled U.S.-aligned former premier Saad al-Hariri in January over a dispute involving the U.N.-backed probe into the 2005 assassination of statesman Rafik al-Hariri, Saad’s father.

Shi’ite Hezbollah and its Christian and Druze allies secured 18 posts in the new government, up from 11 under Hariri’s coalition, enabling them to pass or block decisions more easily.

Hezbollah leader Sayyed Hassan Nasrallah has thrown his weight behind Assad, saying that should the Syrian government fall it would serve American and Israeli interests. Lebanese media said Assad had telephoned Mikati to congratulate him.

Mohammed Safadi, Lebanon’s former economy minister, was named finance minister and will try to improve growth expected at around 2.5 percent this year, dampened by delays in key cabinet appointments and a rash of violent incidents.

The deadlock had also snagged both the 2010 and 2011 budgets, holding up $2 billion in infrastructure projects.

The configuration of Mikati’s government — which Hariri refused to join — marks a reemergence of Syrian and Iranian influence in Lebanon, a proxy arena for Middle East powers.

Officials say a core aim of the government will be to agree on a unified stand to confront indictments by the U.N.-led tribunal, which is expected to implicate members of Hezbollah.

Hezbollah, which denies any role in the 2005 killing, and its allies quit Hariri’s cabinet in January after he refused to disavow the investigation. Efforts by Syria and Saudi Arabia to broker rapprochement between Hariri and his rivals failed.

For the first time since Lebanon’s 1975-90 civil war, Sunnis outnumber Shi’ites in the 30-member cabinet, by seven ministers to five ministers.

Mikati, a telecoms tycoon from northern Tripoli who deems himself politically neutral, is Sunni, in accordance with the Lebanese power-sharing system that allots senior political roles along sectarian lines. The president must be a Maronite Christian and the parliament speaker a Shi’ite.

Fayez Ghusn was named as Mikati’s defence minister, Marwan Charbel as interior minister and Nicolas Sehnawi as telecommunications minister — the latter a post loaded with controversy due to long-running privatization disputes.

Adnan Mansour, an aide to Parliament Speaker Nabih Berri, was named foreign minister. Druze politician Talal Arslan, who had been named as minister of state, resigned citing dissatisfaction with his post.

The government, which must still pass a confidence vote in parliament, will convene on Wednesday to task a committee with drafting a policy statement.