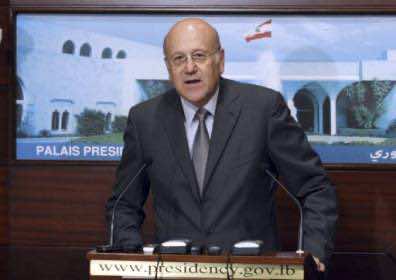 The first test for Lebanon’s new prime minister will be how to handle a UN court likely to indict members of Syrian- and Iranian-backed Hezbollah, which along with its allies now dominates the government, analysts say.

Salem said Najib Mikati, who was appointed premier in January with the blessing of Hezbollah but has since sought to emerge as a political independent, would have to manage pressure by the militant group to cut all ties with the court.

The Special Tribunal for Lebanon, a UN-backed investigation into the 2005 murder of ex-premier Rafiq Hariri, has long been a point of contention between feuding parties in Lebanon.

The STL is widely expected to indict Hezbollah operatives in the Hariri murder, a move the Shiite militant group has outright rejected.

On January 12, Hezbollah and its allies toppled the Western-backed government of Saad Hariri — son of Rafiq — over his refusal to disavow the tribunal.

Almost five months later, Mikati announced the formation of a 30-member government that Hariri’s pro-Western bloc refused to join, sparking fears in the international community that the new cabinet would cease cooperation with the STL.

“Even if the new Lebanese government includes moderates, pragmatically it is a cabinet that was formed under extreme pressure by Hezbollah,” said Imad Salamey, political science professor at the Lebanese American University.

“It is a government that will have to face the STL.”

The United Nations, Lebanon’s former colonial ruler France and the United States — which blacklists Hezbollah as a terrorist organisation — have urged Lebanon to uphold its international obligations.

“This will be the first test of the new cabinet,” said Khattar Abou Diab, international relations professor at the Universite Paris-Sud.

“This is how we will find out whether Lebanon is headed for a confrontation with the international community or not,” Diab told AFP.

The Mikati government marks the first time a bloc led by Hezbollah, which fought a devastating war with Israel in 2006, has led a government in Lebanon.

The opposition, led by Saad Hariri, has slammed the new government as a front for the militant group and its backer, Syrian President Bashar al-Assad, to seize control of Lebanon.

“We denounce the formation of this government and state that Lebanon is a country now being held hostage by the Syrian regime and Hezbollah,” said Fares Soueid, a former MP and secretary general of the March 14 opposition alliance.

What now hangs in the balance is how Mikati will manage the delicate task of drafting government policy as Hezbollah pressures him to cut off all ties with the STL and as the international community watches closely.

“The real battle will be over the wording of the ministerial declaration, which is when we will truly see how Hezbollah and its allies intend on dealing with the tribunal,” said Nadim Shehadeh, Lebanon expert at the London-based Chatham House think-tank.

There have been fears in Lebanon of sectarian violence, should members of Shiite Hezbollah be accused in the murder of Sunni Hariri — a risk experts today do not rule out.

“We will likely face a serious crisis when the tribunal issues its indictments,” said Shehadeh.

“A tribunal indictment that implicates Hezbollah in the murder could prove very dangerous.”

Hezbollah, which has dismissed the STL as part of an Israeli conspiracy, has not yet commented on the new government.

Analysts say the militant group is left uneasy by the uprising against Assad, a longtime ally of Hezbollah.

“As the Syrian regime grows weaker, Hezbollah has had to consolidate its standing in Lebanon as they could be left on their own,” Salem said.

“Being at the forefront of domestic politics is not something they like,” he added.

“They would rather keep a low profile.”