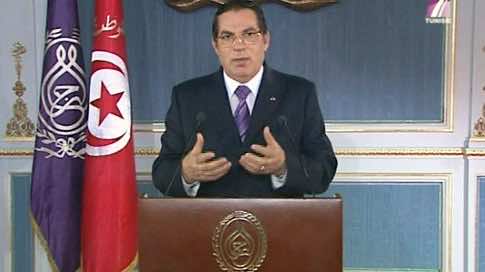 Tunisia’s deposed president will be tried in absentia on June 20 by civil and military courts on charges ranging from embezzlement and murder to drug trafficking, the prime minister said.

Beji Caid Essebsi added in the interview with the Arabic Al-Jazeera news channel late Monday that to this day, the extradition request to Saudi Arabia where he resides remains unanswered.

Zine Abidine Ben Ali ruled Tunisia for 23 years until a monthlong popular uprising forced him to flee to Saudi Arabia on Jan. 14.

Tunisia’s Ministry of Justice said there are 93 counts pending against him, including plotting against the security of the state, murder, abuse of power, embezzlement, money laundering and drug trafficking.

Military tribunals will handle 27 of the counts, according to the state news agency.

The first trials will focus on large quanties of drugs and weapons found in the presidential palace of Carthage, as well as an estimated $27 million (euro18.69 million) in jewelry and foreign currency found in another palace at Sidi Bousaid.

Ben Ali ruled Tunisia with an iron hand for more than two decades, dealing ruthlessly with internal dissent and presiding over a docile press and token political parties.

Since his departure, however, there have been an explosion of political activity with elections to choose an assembly to write the new constitution set for October.

The Tunisian uprising inspired the populations of the Middle East and set off a series of pro-reform movements that has been collectively named the “Arab Spring.”

Egypt, which overthrow its ruler a month after Tunisia, has announced that ex-President Hosni Mubarak, his family and close associates will also stand trial on charges of corruption and murder.