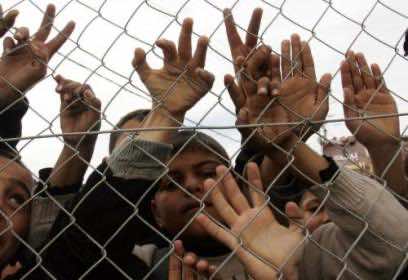 The Gaza Strip enters its fifth year of a full Israeli blockade by land, air and sea on Tuesday with unemployment at 45.2 percent, one of the highest rates in the world, a U.N. aid agency report said.

The U.N. Relief and Works Agency for Palestine Refugees (UNRWA) found that by the second half of 2010, real wages had fallen 34.5 percent since the first half of 2006, when sanctions were imposed by Israel after Hamas, an Islamist group that now rules the Gaza Strip, won a Palestinian legislative election.

The UN says the full-on blockade began a year later.

“These are disturbing trends,” said UNRWA spokesman Chris Gunness, “and the refugees, who make up two-thirds of Gaza’s 1.5 million population, were the worst hit.”

Densely populated Gaza has a population of more than 1.5 million, mostly spread along the 40 km (25 mile) coast of the Mediterranean enclave between Israel and Egypt.

“It is hard to understand the logic of a man-made policy which deliberately impoverishes so many and condemns hundreds of thousands of potentially productive people to a life of destitution,” Gunness said.

Israel continues to blockade Gaza, controlling the flow of imports and tightly restricting access to Israeli territory mainly to urgent humanitarian cases, to prevent Hamas militants who are supported by Iran and Syria from obtaining weapons, explosives and ammunition.

It partly relaxed its grip a year ago in response to international pressure, allowing in more trade goods and expanding the secure logistics hub at Kerem Shalom crossing to a potential 400 truckloads of goods per day.

UNRWA provides food staples and schools for Gaza’s refugee population. The enclave has no airport or seaport for freight.

The U.N. has recently asked countries to dissuade those pro-Palestinian groups with plans to break the blockade by sea in so-called “international humanitarian aid” flotillas that Israel says are simply politically motivated provocations.

Gaza’s pressure cooker atmosphere has been relieved since the fall of Egyptian president Hosni Mubarak this year and a change in policy by Cairo, a party to the blockade with Israel, which now opens the southern border crossing at Rafah daily for civilian traffic, though not for trade.

But UNRWA reports that Gaza’s working-age population (those over 15) is estimated to have grown by 2 percent in the second half of 2010 from the first half, increasing the demand for jobs that do not exist in its broken economy.