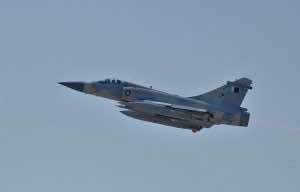 A NATO airstrike hit an area near Libyan leader Moammar Gadhafi’s compound in the capital again Tuesday, as military leaders voiced concerns about sustaining the operations if the alliance mission drags on.

A column of gray smoke could be seen rising from the area around Gadhafi’s Bab al-Aziziya compound shortly before dawn Tuesday. The concussion from the blast was felt at a hotel where journalists stay in the capital.

It was not clear what was targeted, and Libyan officials didn’t immediately comment.

East of the capital, alliance aircraft have begun dropping leaflets warning government troops to abandon their posts outside Zlitan, which lies just west of the rebel-held port city of Misrata.

Rebel forces have been advancing along the Mediterranean coast toward Zlitan, but say they have been instructed by NATO to withdraw ahead of expected bombing runs to old front lines in Dafniya.

The 3-by-5 inch leaflets intended for forces loyal to Gadhafi carry the NATO symbol and a picture of an Apache attack helicopter and burning tanks on one side. Green Arabic writing warns: “There’s no place to hide. It’s not too late to stop fighting. If you continue to threaten civilians, you will face destruction.” The message on the reverse urges soldiers to “stop and stay away from fighting now.”

An Associated Press reporter near the front line said NATO fighter jets were being heard overhead.

If the rebels take Zlitan, they would be within 85 miles (135 kilometers) of the eastern outskirts of Tripoli. A rebel official said opposition leaders in Zlitan have been meeting with their counterparts in Misrata, but he acknowledged they face challenges in advancing on the city.

“We need the people of Zlitan to push more courageously forward. They are dependent on our movements, but the problem is only a third of that city is with the rebels,” said Ibrahim Beatelmal, a rebel military spokesman in Misrata.

NATO’s nearly three-month air campaign has grounded Gadhafi’s air forces and weakened his military capabilities. But there are signs the pace of operations has put a strain on the trans-Atlantic alliance.

In London, the head of the Royal Navy warned that the British fleet _ a key contributor to the Libya mission _ will be unable to maintain the pace of operations if the mission drags on until the end of the year.

Adm. Mark Stanhope told reporters Monday he was comfortable with NATO’s decision to extend the Libya operation to the end of September, but said that beyond that the government would need to make “challenging decisions.”

“If we do it longer than six months we will have to reprioritize forces,” he said.

“If additional resources are needed, this of course will need a political decision,” said the official, Gen. Stephane Abrial, Supreme Allied Commander Transformation.

In western Libya, Gadhafi’s troops were bombarding opposition forces controlling a key border crossing with Tunisia, according to Omar Hussein, a spokesman for rebels in the western Nafusa mountains.

He said government forces were targeting rebels holding the road that leads toward the Dehiba border crossing. Dehiba is a key supply point for the rebels who wrested control of a string of Nafusa mountain towns from Gadhafi’s forces earlier this month.

Canada on Tuesday joined a growing list of countries to recognize the Libyan rebels as the legitimate government of the country.

Foreign Affairs Minister John Baird made the announcement in Parliament as it opened a day-long debate on extending Canada’s military commitment to the NATO-led mission in Libya. Prime Minister Stephen Harper’s government plans to extend an initial three-month commitment to the end of September.

NATO, meanwhile, reported it had carried out 62 airstrikes on Libya Monday, hitting military targets in Tripoli and four other cities in Gadhafi controlled territory. The alliance has considerably stepped up the pace of air attacks over the past several days.