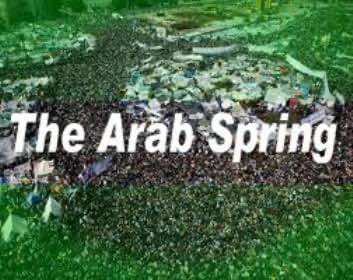 Spurred by democratic aspirations and hostility towards deeply entrenched governments, the uprisings have been followed by conflict and economic woes.

“What we are going through right now is a bottleneck,” said Rabab al-Mahdi, a political science professor at the American University of Cairo.

The December 17 self immolation of a Tunisian street vendor sparked demonstrations that toppled Ben Ali.

Protests spread across the Arab world but so far the leaders of Libya, Syria and Bahrain have refused to step down, responding to popular unrest with brute force.

“The concept of taking to the streets and toppling the regime, like what happened in Egypt and Tunisia, is currently being challenged by the experiences of Libya, Syria, Yemen and Bahrain,” she said.

Despite similar aspirations, the region’s diversity has affected the outcomes of the uprisings.

“There are no two movements alike,” said Antoine Basbous of the Observatory of Arab Countries in Paris.

In Libya, Moamer Kadhafi appears “ready to fall, the question is when.”

Syrian President Bashar al-Assad, however, “is determined to defend himself and has resources.”

Yemen, the region’s poorest country, could face “Somalisation,” chaos and the unravelling of its already weak government, Basbous said.

Its political future hangs in the balance as President Ali Abdullah Saleh convalesces in Saudi Arabia after a bomb blast wounded him.

Bahrain, ruled by a Sunni monarchy backed by Saudi Arabia, crushed the democracy movement in the small but strategic Gulf country, where the majority Shiite population complains of marginalisation.

Tunisia, set to vote in October in its first elections since Ben Ali went into exile in Saudi Arabia, seems to have fared better than Egypt, where the transition, overseen by the military, appears quagmired, he says.

In both countries, the economic challenges that followed the revolts have prompted international pledges of billions of dollars in aid to support democracy and development.

The potential for the revolts to spread to other countries is still there, but it is uncertain.

“The effect on the rest of the region will depend on the outcome of these countries,” said Mahdi, noting that the remaining countries in the region all have huge obstacles that would dampen the chances of mobilisation.

“In Algeria, the recent experience of a civil war will make it harder for people to repeat the experience,” she said.

Algeria can also assuage grievances with its oil income.

“In Morocco, the integration of opposition has been more liberal making the stakes higher for toppling the regime.”

The Kingdom of Jordan has seen a relatively small protest movement demanding political and economic reforms and an end to corruption.

Protests have also failed to gain scale and traction in the oil-rich Gulf monarchies, which have tried to stave off protests with sharp increasings in public expenditure.

In the case of Bahrain, this has led to plummeting credit ratings.

“The process is not a mechanical one. It is not just about if one country falls, the others fall automatically. It depends very much on the internal situation in each country,” said Mahdi.

Despite the mixed results and uncertainties, some pro-democracy activists remain optimistic.

Issander el-Amrani, a Cairo-based journalist and blogger at The Arabist (www.arabist.net), said the rebellions showed a “rejection of authoritarian systems” and “a real enthusiasm for universal values.”