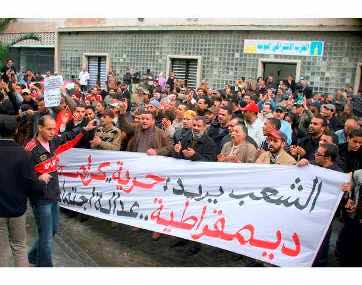 CASABLANCA — On April 29, the day after a terrorist bomb in a popular Marrakesh tourist cafe left 16 dead, the Moroccan government said the attack would have no impact on promised political reforms.

Yet in the weeks that have followed, peaceful demonstrations have been banned by the authorities, and attempted protest marches violently repressed.

The question that many are now asking is what happens next.

Responding to the pro-democracy movements that emerged in February, King Mohammed VI pledged in a March 9 speech to introduce wide-ranging reforms. In future, he said, the prime minister, now a royal appointee, would be chosen from the majority party in Parliament and would wield effective executive power. He also appointed a commission to draw up, by this month, proposals for a revised constitution to be put to a referendum.

Last Friday, the government said the commission had presented a first outline of its proposals. It gave no details but said the king had ordered it to speed up the rest of its work.

Many observers, however, fear that the April bombing may have set back the promised timetable.

“The attack occurred in the midst of a serious political debate,” said Youssef Belal, a member of the Progress and Socialism Party and a supporter of the pro-democracy movement. “But fear brings out the need to have a strong state.”

Yet, terrorism or no terrorism, he said, the need for reforms has not diminished.

Abdeslam Maghraoui, a political science professor at Duke University specializing in terrorism in North Africa said: “The reform process is stalled because the regime is still unwilling to reform and the Marrakesh bombing provides an easy excuse,” to justify inaction to critical foreign allies.

“That is especially true of Western allies who are both pushing for reforms in Morocco but are also concerned about the terrorist threat,” he added.

In the aftermath of the bombing, the government has denied several times that it would allow itself to be deflected from its course.

“Those who fear an undermining of the announced reforms should be reassured: It’s a strategic and irreversible choice,” the government spokesman and communications minister, Khalid Naciri, was quoted by the media as saying on May 24.

Yet, despite such reassurances, suspicion of the government’s intentions remains widespread among its opponents. “Concerns exist that reforms will take a step backward or even stop,” Abdelhamid Amine, a member of the Moroccan Association for Human Rights, was quoted by the media as saying.

“But the February 20 Movement will not be intimidated,” Mr. Amine added, referring to the loose federation of reformist an opposition groups that emerged to spearhead the pro-democracy campaign in February.

Some opposition activists go further, accusing the authorities of exploiting the Marrakesh attack to crack down on dissent. “The only real beneficiaries of this are the defenders of the status quo,” said Rida Benotmane, 34, a member of the Association of Former Islamist Prisoners, a support organization for detainees and their families. “The attack in Marrakesh serves only as a pretext to justify the takeover of the streets by those in power.”

Yet even critics of the government concede that the authorities have a historical justification for taking the terrorist threat seriously. The May 2003 Casablanca bombings, the trigger for the government’s repressive anti-terrorism law, killed 45 people at sites including the Belgian Consulate and a Jewish community center, Mr. Maghraoui noted.

The broad-brush law, punishing all “terrorist-related activities” and criminalizing “the intent of committing an act of terrorism,” has resulted in hundreds of arrests and convictions, with sentences as long as 30 years to life in prison, said Mohamed Darif, who teaches political science at Hassan II University. According to Western media reports, 2,000 people were tried, sentenced and jailed after the Casablanca bombings.

King Mohammed, interviewed by the Madrid daily El País in 2005, admitted that the security crackdown may have been “exaggerated.” Conceding that “there are no doubts that there have been abuses,” he pledged an end to arbitrary detentions.

As a good-will gesture, the government released some prisoners, but even as it did so, critics continued to be jailed. Mr. Benotmane, for example, was detained and condemned under the anti-terrorism law to four years imprisonment in 2007 for publishing online comments criticizing the government’s foreign policy and supporting armed resistance to the U.S. occupation of Iraq, according to a report by Human Rights Watch last year.

In the eight years between the Casablanca and Marrakesh bombings, Morocco’s draconian security policies were credited by its Western allies with minimizing the ability of Al Qaeda in the Islamic Maghreb, A.Q.M.I., to operate inside the country. Despite a handful of attacks in the past few decades, A.Q.M.I., believed to number a few hundred terrorists of various nationalities hiding in the Sahel, has never succeeded in establishing a significant Moroccan base, say officials including the Moroccan interior minister, Taieb Cherquaoui.

“Events seem to indicate that the threat is quite serious,” he said. “During the past decade, there were two major bombings and police officials say several local and terrorist networks have been destroyed.”

Yet even though the Marrakesh attack was a reminder of that ever-present threat, Mr. Belal of the Progress and Socialism Party said he remained optimistic that the interruption in the reform process since April could still prove to be temporary. “I think the context is favorable for a democratic transition,” he said.

In the weeks following the king’s March 9 speech this year, 190 mainly Salafi jihadist prisoners were released: and even after the April 28 bombing, the government restrained its response to the arrest of a half dozen people suspected of direct involvement, rather than launching a broad wave of arrests.

The planned reforms should offer a road map to a parliamentary system with a real separation of powers, said Kader Abderrahim, a researcher at the Institute of International Relations and Strategic Studies in Paris. “The king’s speech on March 9 was very promising,” Mr. Abderrahim said. “Now he needs to back it up with concrete action.”