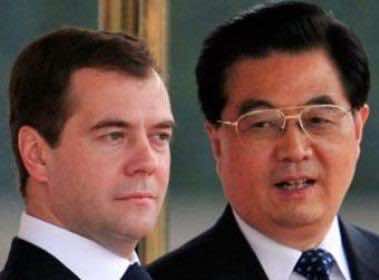 Russia and China oppose outside interference in the unrest in the Arab world, the two presidents said Thursday in a declaration, as the West seeks their support in increasing pressure on Syria.

“The sides believe that the search for settling the situation in the countries of Middle East and North Africa should take place in the legal field and through political means,” said the declaration signed by Presidents Dmitry Medvedev and Hu Jintao.

“Outside forces should not interfere in internal processes in the countries of the region.”

The two presidents also expressed concern over the situation in Libya, calling for an end to hostilities.

Russia has said it opposes the UN Security Council adopting any resolution on Syria, risking a major dispute with the West over the response to the crackdown on Syrian protestors.