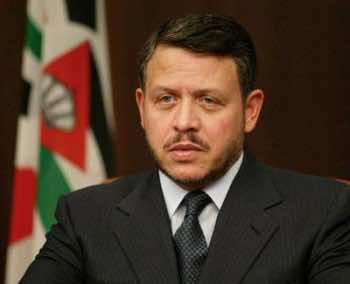 King Abdullah II of Jordan gave a 45-minute interview to The Washington Post at his palace in Amman. Here are some highlights:

“Each country its cost analysis is going to be different. So what we are you seeing in Syria, for example, is different than what’s going on in Jordan. The maps are being rewritten.”

On political reform in Jordan:

“Arab Spring actually gave me, in a way, the opportunity that I’ve been looking for the past 11 years. So it’s funny enough in Jordan, particularly, that it was the old guard that jumped onto the reform bandwagon because it was popular [and] that now have found themselves in a position that the momentum has moved forward and cannot be reversed. Once you open the flood gates, that’s it. Now the challenge, I’ll be quite honest with you, is that the political reform is done in the right way.?.?.”

“I think my job is to lead the debate. I can’t tell them to form a party, and I can’t tell them how, but I can maybe just make them more aware of the challenges and the facts. That debate allows things to move in the right direction.?.?.”

“Jordan has to show the Arab world that there’s another way of doing things. We’re a monarchy, yes, but if we can show democracy that leads to a two-, three-, four-party system – left, right and center – in a couple of years’ time, then the Muslim Brotherhood will no longer be something to contend with.”

On the future of al-Qaeda in the Middle East

“You’re always going to have terrorism. The problem with al-Qaeda, Hamas and all these groups is that they use the Israeli-Palestinian issue as a recruiting ground. The minute the Israelis and Palestinians solve their problem, then al-Qaeda no longer becomes international; it becomes like a white supremacy group that you might have in the States. It becomes an internal extremist element that is looking at taking over your country but not taking over the world. .?.?. Al-Qaeda disappears as an international organization when Israel-Palestine as an issue is taken off the table.”

“When [Israeli Prime Minister Binyamin] Netanyahu keeps saying to us, ‘Iran, Iran, Iran,’ I go back to him: “peace, peace, peace.” Because the first people who will stand up and say, ‘Iran, stop pointing rockets in our direction,’ will be the Palestinians.”

On the urgency of the peace process:

“Solve the problem today when you’re strong, not 10 years from now, where I think that all the trends have changed.

“We can always find a ‘Last Best Chance,’ but the odds of us being able to come out with success mount against us. When we get to the point that the two-state solution is no longer feasible, what then?

“For Israel, as they kick this ball down the road, [the situation] will get more and more complicated for them, which is not a good thing. An isolated Israel and an insecure Israel [is not] a healthy thing for any of us. So that’s why I’m saying: Let’s solve it now where we’ve all got our heads above the water as opposed to the quagmire we might find ourselves in four, five years from now.”

On the Mideast stalemate and its consequences:

“I’m not convinced that they [Israel] are interested in a two-state solution and, therefore, they’re not interested in peace with the Arabs, because unless they do the two-state solution, that can’t happen. And I just don’t think that Israeli politics, internal politics, will allow that to happen. So although we will continue to try to bring both sides to the table, I am — for the first time — the most pessimistic that I have ever been in 11 years. 2011 will be, I think, a very bad year for peace, and invariably when there’s a status quo, usually what shakes everybody up is some sort of military confrontation, at which point we all come running and screaming to pick up the pieces. Nobody wins in a war.”

On America’s support for Israel:

“When you get billions in aid and your weapons resupplied and your ammunitions stock resupplied, you don’t learn the lesson that war is bad and nobody wins. So there’s a false sense of understanding.”

“My feedback after the trip was that [Netanyahu]’s visit was not that much of a success. .?.?. He basically came to say, ‘It’s my way or the highway.’ The problem now is I think that we’re back to the status quo; everyone is panicking about the [U.N. General Assembly vote] in September. .?.?.

“Now the president had talked about the possibility of launching some sort of initiative before September, but I have no indicators to see that actually happening. So you’ve got those that are saying to the Palestinians, ‘Don’t you do this in September,’ but then there are no initiatives to try and do something else.

“I support anybody whether it’s the Russians or the French, the Americans — anybody coming out with any initiatives, because when we all sit back and, you know, sit on our haunches, then that’s never a good story.

“You have so many American presidents that have sort of always tried to raise the bar. Clinton raised the bar, [George W.] Bush raised the bar even more, and Obama even more. It’s just the inability of doing things on the ground is what the frustration is. I think the Americans are looking at their own internal issues and maybe other issues internationally, and so the Israeli-Palestinian issue is not a priority.”

On Israeli politics and the peace process

“The polls are extremely disturbing, unlike they were a couple of years ago. Eighty-five percent of Israelis are saying they’re not interested in the ’67 borders, so it just shows me that now Israeli society has changed, where they’re beginning to believe the rhetoric of their leaders. I think you have the right and the hard right in Israel, and everybody has moved so many degrees.”