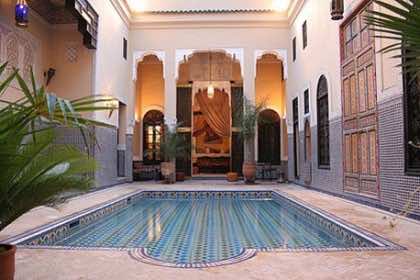 In its 2011 report about the economic, social and political situation in Morocco (The Report, Morocco 2011: http://www.oxfordbusinessgroup.com/product/report/report-morocco-2011 ), the London-based Oxford Business group outlines the steady gains achieved by Morocco in the tourism sector over the past decade.

After a strong growth in 2010, figures for early 2011 point to another bumper year for Morocco’s tourism, said the Oxford Business Group (OBG).

Confidence remains high despite the April bombing of a café in Marrakech, the effect of which appears to have been limited and ongoing regional instability. The government continues to roll out ambitious plans for the decade ahead, said the think-tank in a report.

The bottom-line indicator for the sector, tourism receipts, grew by a healthy 6% on the previous year, to Dh56.2bn, although it is worth pointing out that revenues declined in 2009 amidst the lingering effects of the global economic slowdown, notes OBG.

This year is also off to a strong start, with all major indicators again showing healthy growth, added the source, noting that despite a dip in March, tourist arrivals increased 6 pc y-o-y in the first quarter of 2011, to 1.83 million.

Total tourism receipts for January, February and March increased by 6.7% y-o-y, to Dh11.1bn.

French tour operators also reported little in the way of cancellations following the bombing. Local business representatives regard this number as relatively small and encouraging, having feared a significantly worse effect.

The report underscores also that since the “the launch of tourism strategy Vision 2010 in 2001, tourist arrivals have more than doubled. Total bed capacity has increased 70% in the past decade, reaching 164,612 in 2009”.

This increase of arrivals to Morocco has been fostered after the open-sky agreement with the EU went into force in 2005, as the number of international connections has increased from 10 to about 40 since then.

The report highlights also the plans that are underway to overhaul infrastructure in Fez, Casablanca and Agadir in order to increase their competitiveness as tourism destinations.