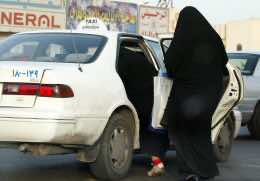 The Saudi government has made many promises to women. Six years ago, while denying their right to participate in the kingdom’s first municipal elections, it promised they would be allowed to do so on the next occasion. Polling is due later this year but women are still denied the right to register as voters. In 2009, during Saudi Arabia’s human rights review at the UN, it also promised to revise the “male guardianship” system that limits women’s freedom of movement. Two years later, this freedom is yet to be secured. And since at least 2005, King Abdullah and other senior figures have said they would support rescinding the ban on women driving. This promise, too, has so far not been kept.

When Manal al-Sharif, a 33-year-old Saudi woman, dared to drive last month, Saudi authorities not only detained her, but also accused her of causing a social disturbance and ruining the moral fabric of their country for posting a video of herself driving on YouTube.

Saudi officials may have thought that arresting Sharif would deter other women from doing the same. Quite the contrary: the Women2Drive campaign on Facebook gathered steam and has called on women throughout the kingdom who have international drivers’ licences to drive on 17 June in protest against the ban.

Even the presence of another Facebook group with 500 members that has vowed to give women beatings if it finds them driving on 17 June does not appear to have daunted the women.

Banning women from driving makes their lives a lot harder. Sharif explained why she took matters into her own hands and drove in protest: late one evening she was unable to get home from work. When she called her brother, he did not answer the phone. She did not have a driver at the time, and had to look for a taxi. If she were allowed to drive, she could have simply driven home.

Many other Saudi women don’t have a male relative to drive them around and can’t afford to spend over £180 to hire a driver. Last month the daily Al-Riyadh reported that police stopped a woman from al-Ras governorate for driving to a store to buy groceries. Instead of escorting the driver and her two female companions back home, the police told the women to call a male relative to collect them. They had no relative to call and eventually got a male neighbour to come for them. But, it seems that every day women from Jeddah, al-Ras, and Riyadh are defying the driving ban, and getting behind the wheel.

No secular or religious law prohibits Saudi women from driving. Saudi clerics issued a non-binding fatwa, or religious edict, in 1991 banning women from driving and, following an earlier generation’s attempt to protest against the ban, the interior ministry decreed that women mustn’t drive. Driver’s licences are issued only to Saudi men.

Saudi Arabia is the only country in the world to ban women driving, but this is part of a broader pattern of discrimination against women. In Saudi society, women are not allowed to make day-to-day decisions without permission from their male guardians, usually a husband, father, brother or even a son. This means they cannot work, study or travel without prior male approval. They cannot access some types of medical care, and they cannot typically file a complaint about domestic abuse without a male guardian present, who may well be the abuser.

A Human Rights Watch report in 2008, Perpetual Minors, documented abuses against Saudi women stemming from the male guardianship system and segregation policies. The campaign to drive symbolises larger discrimination than not being allowed to get behind the wheel of a car.

King Abdullah Abd al-Aziz has lauded Saudi women internationally for their achievements in higher education, and for their entrepreneurial skills. Despite his praise, Saudi women remain second-class citizens in their own country and face discrimination every day. The Saudi king has a choice to make on 17 June: to allow women to drive, and ultimately to exercise their full range of rights, or to continue down the same old path of making empty promises.