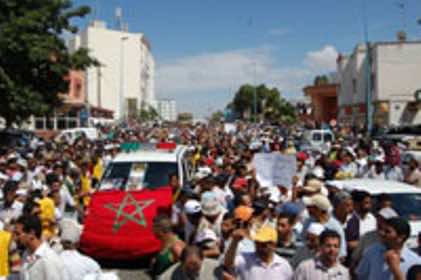 Two Moroccan human rights NGOs have urged for revealing the real circumstances of the death of Kamal Amari and determining the responsibilities accordingly.

In a joint report, presented Thursday in Rabat, on the circumstances of Kamal Ammari’s death on June 2 in Safi (350 km south of Rabat), “The Ombudsman for Democracy and Human Rights” and “the Moroccan public freedoms Observatory” have stressed the need to open an investigation into “the testimony of all who were victims of assault, torture, kidnapping on 29 May 2011, while ensuring that prosecutions against those involved in such acts will be carried out.”

President of the “Ombudsman for Democracy and Human Rights”, Khadija Marouazi, said the results of fact-finding mission showed that the “unjustified aggression and violence that Kamal Ammari was victim of (…) were the direct cause of his health deterioration, which resulted in his death on Thursday, June 2.”