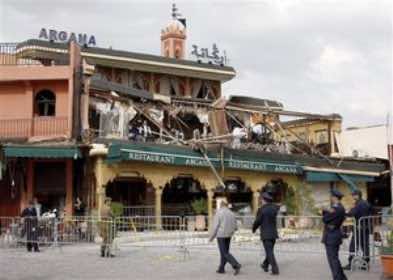 According to the Maghreb Arab Press news agency citing a judicial source, the criminal court in charge of terrorism cases will start on June 30 examining the case of the seven suspects involved in the attack that targeted the Argana coffee in Marrakech.

Last month, the examining magistrate of the court of appeals of Sale completed the preliminary cross-examination of the seven suspects, who are accused of “setting up a criminal gang as part of a collective project aiming at seriously undermining the public order, premeditated murder, possession and manufacture of explosives and belonging to a banned religious group.”

Two new suspects were brought, on Thursday, before the public prosecutor of Rabat’s court of appeals.