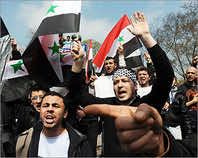 Three people were killed and nine were injured Friday when clashes erupted in northern Lebanon between groups aligned for and against the Syrian government, Lebanese security sources said.

The clashes erupted in the northern port city of Tripoli between Sunni Muslim groups – rallying in support of Syrian protesters against the regime of Syrian president Bashar al-Assad – and Alawites, who belong to an offshoot of Shiite Islam and are staunch supporters of the regime.

The city’s Bab al-Tabbaneh and Jabal Mohsen neighbourhoods saw heavy fighting with machine guns and rocket-propelled grenades. The two sides have often clashed in the area since 2008.

The sources said a Lebanese soldier was among the dead.

The heavy clashes prompted the Lebanese army to intervene and deploy in the two neighbourhoods to prevent an escalation and protect civilians from sniper fire.

The army issued a warning for all armed men to evacuate the streets or risk being fired upon.

Earlier, 600 people had gathered in the city after Friday prayers to protest al-Assad’s regime, which has been facing unprecedented revolts since March 15.

Tripoli is mainly dominated by Sunni Muslims who support Lebanon’s former, Western-backed premier, Saad Hariri. The Alawites who live in some areas near Tripoli are loyal to Lebanon’s ruling Hezbollah-led coalition, which is backed by Iran and Syria.