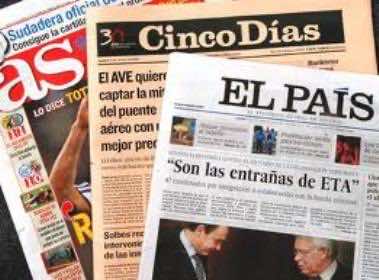 As expected, Spanish media have been quick to echo the new constitution announced by King Mohamed VI in his yesterday’s speech to the Moroccan people.

The main Spanish daily news papers, such as el Pais, El Mundo, La Vanguardia, have all highlighted the changes introduced by the draft constitution to be put to referendum on July 1st.

“Specifically, the king must choose the head of the government from the parliamentary majority. The latter will now appoint the ministers, senior officials, directors of public companies and ambassadors, although some of these positions require the approval of the sovereign”, highlighted the daily news paper El Pais.

Referring to the other main new elements brought about by the constitutional reform, El Pais also emphasized that the King “will no longer be sacred, but rather inviolable”, as is the case of Juan Carlos, King of Spain.

The King, however,” will retain the title of Commander of the Faithful and religious matters will, thus, remain within his exclusive competence”, added the Madrid-based newspaper.

The right-wing newspaper El Mundo, referred to the fundamental rights, including human rights enshrined by the new constitution. “Human rights, including the criminalization of torture, disappearances or arbitrary detention will also be guaranteed”, noted the Madrid-based newspaper,  adding that “the monarch has also referred to the safeguard of freedom of press, speech and opinion and the right of access to information”.

The new Constitution is “a historic and decisive in the process of completing the construction of the rule of law and democratic institutions” of Morocco, noted La Vanguardia quoting King Mohamed VI.

The “head of government” will have even the power to dissolve the House of Representatives, underscored the newspaper, adding that the powers of Parliament will, also, be strengthened.

La Vanguardia also referred to the powers vested in His Majesty the King as Head of State, Supreme Chief of the armed forces and Commander of the Faithful, noting that the new Constitution provides for a “Security Council” which will be chaired by the Sovereign and guarantees the independence of the judiciary vis-à-vis other powers.

In the language field, Morocco has taken a “new initiative” in the region by granting the Amazigh the status of official language besides Arabic language, noted the Barcelona-based newspaper.