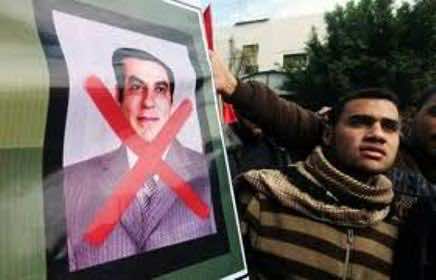 Ousted Tunisian president Zine al-Abidine Ben Ali, whose trial in absentia begins on Monday, has denied all charges against him and dismissed them as a “victors’ justice”, a source close to him told AFP.

Ben Ali who fled on January 14 to Saudi Arabia where he is not allowed to talk politics has “strongly denied the accusations fielded against him,” said the source requesting anonymity.

A criminal court in Tunis is to begin hearing the first of about 93 cases brought against the authoritarian ruler, ousted in a month-long popular uprising that inspired other revolts still rocking the Arab world.

Ben Ali “considers what is happening to be a shameful picture of a victors’ justice,” said the source, adding that the man who ruled Tunisia for 23 years “thinks that the trial might be aimed at diverting the attention of Tunisians from the troubles sweeping the country.”

The source said Ben Ali remains in the Red Sea city of Jeddah along with his wife Leila Trabelsi, his daughter Halima, 18, and his son Mohammed Zine el Abidine, 6.

The first charges against Ben Ali and his wife arise from the discovery of millions of dollars and jewellery in a palace at Sidi Bou Said, near Tunis.

Investigators are trying to establish an inventory of alleged ill-gotten gains amassed by the ousted president and his wife, estimated by the head of a national commission as being worth about a quarter of Tunisia’s gross national product.

Ben Ali also faces charges related to drugs and weapons found in a palace in Carthage.

Conviction on these allegations would be punishable by five to 20 years in prison, but other charges of murder and torture – to be dealt with later by a military court – carry the death penalty.

He responded to the accusation of possessing arms by insisting they were “hunting weapons received as gifts from other leaders,” the source said, while he dismissed the charges related to drugs as fabrications.

He also said the jewellery items were “gifts received by his wife.”

“He thinks that the lack of hard evidence has pushed them to fabricate such allegations,” the source said. “He hopes that the people of his homeland will do him justice.”

Many Tunisians are happy the once-powerful couple are to face charges but others say their trial in absentia is merely intended to appease demands for justice and change months after the uprising.

Two lawyers have been appointed to defend Ben Ali and his wife in the trials to begin Monday relating to cash, weapons and drugs.

Of the 93 charges being prepared against him and his circle, 35 will be referred to a military court, said justice ministry spokesman Kadhem Zine el Abidine.

Tunisian authorities have not said who else in Ben Ali’s entourage would come before the military courts.

But former interior minister Rafik Belhaj Kacem may find himself named in cases linked to 300 civilian deaths between December 17 and January 14, according to the head of the army judiciary, Colonel Major Marwane Bouguerra.

“Who killed, who directly carried out the murder? Who gave the order to kill? Military justice must determine the responsibilities,” Bouguerra said, stressing that the trials would fully respect “legal guarantees.”

Ben Ali has kept a low profile since his escape to Saudi Arabia, with a relative saying in February that he was in a coma after a stroke.

However, he surfaced recently to denounce, through a French lawyer, the proceedings against him as a “masquerade”.

Saudi Foreign Minister Saud al-Faisal said when the kingdom gave refuge to Ben Ali that he would not be allowed to conduct political activities from the kingdom.

“This act (of sheltering Ben Ali) should not lead to any kind of activity in Tunisia from the kingdom… There are conditions, and no act in this regard will be allowed,” Prince Saud said.

Several other leaders who found refuge in Saudi Arabia in the past were taken in under the same conditions.

Saudi Arabia has so far not replied to extradition requests from Tunis, although Bouguerra has said an accord reached in Riyadh in 1983 covers extradition between all Arab states.