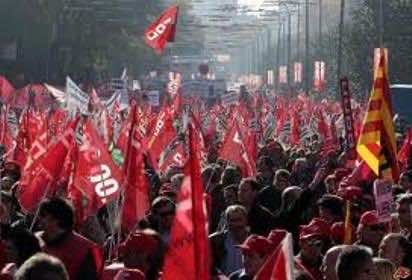 Spanish protesters of all stripes – young and old, working and unemployed – marched Sunday in Madrid to drive home their anger over high unemployment, bleak economic prospects and politicians they see as inept.

Similar demonstrations were being held later in other cities including northern Barcelona, eastern Valencia and southern Seville. Police were out in force after a Wednesday protest in Barcelona turned violent.

“A sacred rule of democracy is that in the exercise of rights you do so peacefully,” he said.

Nearly two years of recession have left Spain with a 21.3-percent unemployment rate _ the highest in the 17-nation eurozone – and addled with debt.

The jobless rate, which has more than doubled since 2007, jumps to 35 percent for people aged 16 to 29. Many young, highly educated Spaniards can’t find jobs as the eurozone’s No. 4 economy struggles with low growth.

Protests began May 15 and spread to cities across the country, striking a chord with hundreds of thousands fed-up with the wage cuts and tax hikes needed to resolve a financial crisis they see as created by banks and wealthy developers.

Protester Antonio Cortes, 58, said Spain’s workers were being asked to bear the brunt of the financial crisis.

“This crisis was created by the capitalist financial system and we are paying for it. All the cuts shouldn’t be aimed at the working class,” he said.

Marchers departed from six points around Madrid bearing banners saying “Let’s march together against the crisis,” heading to Neptuno square near the country’s parliament building.

Zapatero’s government has tackled the crisis by cutting government spending, freezing pensions, raising the retirement age and making it easier and cheaper for companies to lay people off.

It has not needed or sought an international bailout like fellow eurozone members Greece, Ireland and Portugal, but its financial troubles strike fear in other European capitals due to the sheer size of its economy.