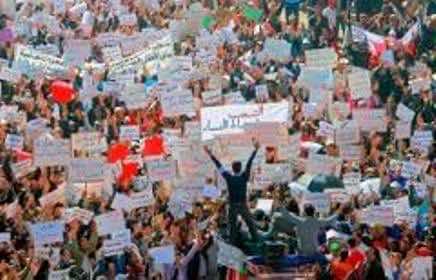 Several thousand people marched through Morocco’s biggest city on Sunday to protest that constitutional reforms unveiled this week by King Mohammed have not gone far enough.

After some of the biggest protests in decades — inspired in part by the “Arab Spring” uprisings — the monarch announced on Friday he would devolve some of his powers to parliament and the government and put the reforms to a referendum on July 1.

Under the changes, the king would retain his hold on security, the army and religion. That disappointed some opponents who had wanted to see the monarch hand over all his executive powers to elected officials.

“We are here to reject the proposed constitution,” said Aziz Yaakoubi, one of the organizers of Sunday’s protest in Casablanca, Morocco’s commercial capital.

“It keeps all the powers in the hands of the king. He refused to listen to the street.”

About 10,000 people took part in the protest, according to a Reuters reporter at the event, while about 500 pro-monarchy activists gathered for a nearby counter-demonstration.

A government official, who did not want to be identified, said 2,500 people took part in the opposition protest and that most of them were members of a banned Islamist group. The official also said the pro-monarchy counter-protest was attended by 70,000 people.

Most Moroccans revere the monarch and months of protests demanding he give up his executive powers have failed to win the sort of popular support that toppled long-standing leaders earlier this year in Tunisia and Egypt.

The moves by King Mohammed, who heads the Arab world’s longest-serving dynasty, are being closely monitored by Gulf Arab monarchies which are also facing calls for reform.

Before the march got underway, several dozen young men carrying the Moroccan flag, sticks and broken bottles charged the protesters. Activists blocked their way and the confrontation was defused.

There was a light police presence and the march ended without any violence.

The referendum is likely to endorse the monarch’s reforms. Some people at Sunday’s protest, organized by the February 20 opposition movement, called for a boycott of the vote.

Some of the demonstrators chanted: “Moroccans, the referendum is a charade!” and “We are not voting for a constitution we don’t agree to!”

“The king introduced cosmetic changes that actually strengthen his grip over the decision-making process,” said Abderrahim Tafnout of the Unified Socialist Party, which has two seats in parliament.

There were also protests organized by the February 20 movement on Sunday in other cities including Tangier and Rabat, but figures on how many people took part were not immediately available.