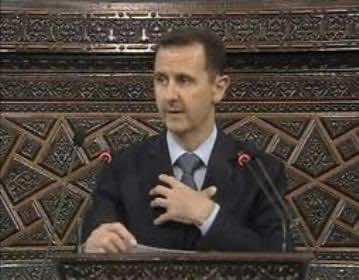 President Bashar al-Assad vowed Monday not to reform Syria under “chaos” but said dialogue could lead to a new constitution, after his deadly crackdown on anti-regime protests that has stirred Western condemnation.

Syria was at a “turning point” after “difficult days,” the president said in a televised speech at Damascus University, vowing the country would emerge stronger in the face of the “plotting” against it.

He said a “national dialogue” was underway that could lead to a new constitution and raised the possibility of elections and an end to the ruling Baath party’s dominance, while warning the economy was on the verge of collapse.

Offering his condolences to the families of “martyrs” from the unrest rocking the country since mid-March, Assad said there could be “no development without stability, no reform in the face of sabotage and chaos.”

“We make a distinction between those (with legitimate grievances) and the saboteurs who represent a small group which has tried to exploit the goodwill of the Syrian people for its own ends,” said Assad.

The Syrian leader’s third speech to the nation since the protests broke out, punctuated by applause from the invited audience, was buoyed by a Russian pledge to block Western moves against him at the United Nations.

Western leaders, meanwhile, have been pushing for concrete measures towards reform in Syria.

European foreign ministers, frustrated by Russia’s threat to use its veto in the UN Security Council, gathered in Luxembourg to discuss tougher sanctions of their own against Assad’s government as its deadly crackdown intensifies.

Britain’s Foreign Secretary William Hague said the international community was looking for Assad to “respond to legitimate grievances” of his people, insisting “Assad should reform or step aside.”

The Syrian leader has made two previous interventions during the unrest.

On March 30 –  two weeks after the protests against his 11-year reign started –  he addressed parliament and called the demonstrations a “conspiracy” fomented by Syria’s enemies.

On April 16, he announced in a televised address that the emergency law in force for nearly 50 years would be abolished, expressed his sadness at the deaths of protesters and called for a national dialogue.

The opposition dismissed that offer as too little too late.

To step up the pressure on Assad to deliver real change, Western governments have been circulating a draft resolution at the Security Council that would condemn his crackdown on dissent.

But President Dmitry Medvedev said on Monday that Russia was ready to use its veto to block any such move.

Speaking in an interview with the Financial Times, Medvedev said he feared the text would be used as cover for Libya-style military action.

“What I am not ready to support is a resolution (similar to the one) on Libya because it is my deep conviction that a good resolution has been turned into a piece of paper that is being used to provide cover for a meaningless military operation,” he said.

“There will not be such a resolution. Russia will use its Security Council permanent member rights,” he said, referring to Moscow’s right of veto.

British Prime Minister David Cameron had said that if any Security Council permanent member threatened to veto the Western draft then “that should be on their conscience.”

But Medvedev insisted he did not want to have on his conscience that he had failed to halt a potential drift to military intervention.

Syrian opposition activists, who announced the creation of a “National Council” on Sunday to spearhead their battle to oust Assad’s regime, expressed frustration at the failure of the international community to act more vigorously.

“In Libya, after the death of 200 people, Kadhafi no longer had legitimacy,” their spokesman Jamil Saib said.

“Here in Syria, while all human rights groups say that there are 1,500 killed and thousands of injured or people arrested, the international community and the Arab world are silent.”

According to the London-based Syrian Observatory for Human Rights, the violence has so far claimed the lives of 1,310 civilians and 341 security force members.