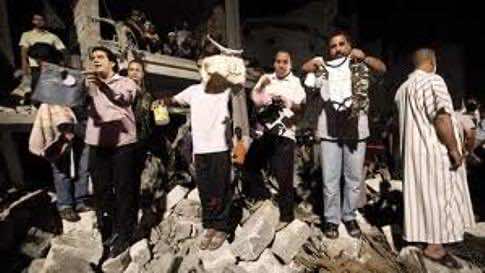 NATO on Sunday acknowledged it was responsible for civilian deaths in Tripoli after Libyan officials showed reporters five bodies, including two toddlers, they said were among nine people killed in a “barbaric” air strike.

“It appears that one weapon did not strike the intended target and that there may have been a weapons system failure which may have caused a number of civilian casualties,” the statement added.

Libyan government spokesman Mussa Ibrahim earlier accused the Western alliance of “deliberately targeting civilians,” insisting there were no military targets anywhere near the residential neighbourhood of Tripoli that was hit overnight.

Alliance spokesman Wing Commander Mike Bracken had earlier said NATO was looking into the matter, adding: “NATO deeply regrets any civilian loss of life during this operation and would be very sorry if the review of this incident concluded it to be a NATO weapon.”

The admission that the civilian deaths were caused by NATO is an embarrassment for the alliance which has led the bombing campaign under a UN mandate to protect civilians.

However, officials from the rebel-held east of the country blamed Kadhafi for the deaths, alleging that the veteran strongman was deliberately using schools and mosques to stash arms.

“We are sorry for the loss of civilian life,” said rebel spokesman Abdel Hafiz Ghoga, adding that “we hold the Kadhafi regime responsible for having placed military armaments and rocket launchers near civilian areas.”

Journalists were taken to the Al-Arada district of Tripoli to see rescue teams and bystanders desperately searching for survivors among the wreckage of a two-storey block of flats after the early morning air strike.

An AFP correspondent saw two bodies pulled from the rubble.

Tripoli insisted the scene was not staged after officials showed journalists a little girl in hospital two weeks ago they said was wounded in a NATO air strike. One of the medical staff said she had been in a traffic accident.

The alliance has acknowledged mis-hits in the past, mostly involving rebel fighters wrongly identified as loyalist troops.

On Saturday, NATO acknowledged that aircraft under its command had accidentally hit a rebel column near the oil refinery town of Brega on the frontline between the rebel-held east and the mainly government-held west on Thursday.