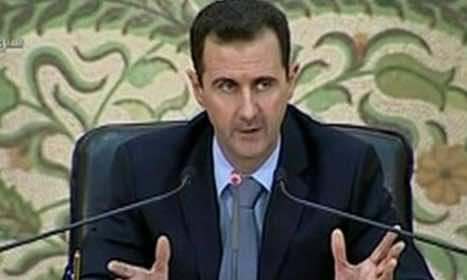 Syria’s president said Monday his regime would consider political reforms, including ending his Baath Party’s monopoly in politics, but thousands of enraged protesters accused him of clinging to power and took to the streets shouting, “Liar!”

In a 70-minute, televised speech, Bashar Assad acknowledged demands for reform were legitimate, but he rehashed allegations that “saboteurs” were exploiting Syria’s 3-month-old pro-democracy uprising. He also called for national dialogue but warned that “there is no political solution with those who carry arms and kill.”

“There are those who have demands that they want the state to meet, and I have spoken before about the legitimate demands. This is one of the state’s duties toward its people,” Assad told supporters at Damascus University, speaking from a podium flanked by six Syrian flags.

He said a national dialogue would start soon and he was forming a committee to study constitutional amendments, including one that would open the way to forming political parties other than the ruling Baath Party.

He said he expects a package of reforms by September or the end of the year at the latest. Parliamentary elections, scheduled for August, might be postponed if the reform committee decides to delay them, the president said.

But the speech signaled Assad’s clear intent to try to ride out the wave of protests, showing the steely determination that has kept his family in power for 40 years, playing on fears his downfall could usher in chaos.

“We want the people to back to reforms but we must isolate true reformers from saboteurs,” he said.

Other besieged dictators across the Middle East _ notably Egypt’s Hosni Mubarak _ used the same argument as they sought to hold onto power during the Arab Spring, warning of chaos in their wake. In Syria, the warning has a special resonance, given the country’s volatile mix of ethnic groups and religious minorities.

“It did not give a vision about beginning a new period to start a transfer from a dictatorship into a national democratic regime with political pluralism,” Hassan Abdul-Azim, a prominent opposition figure, told The Associated Press.

Activists said protests erupted in several towns, including in the restive northern province of Idlib, in the cities of Homs, Hama and Latakia in central Syria, and in the southern town of Daraa, where major protests first flared in mid-March. Many shouted that the people want to see Assad go.

“We want only one thing: Toppling the regime!” read one banner. In the Damascus suburb of Arbeen, protesters shouted, “Liar! Liar! Liar!” as they marched.

The accounts could not immediately be independently confirmed because Syria has barred foreign journalists and placed tight restrictions on the local media.

The opposition estimates more than 1,400 Syrians have been killed and 10,000 detained as Assad unleashed his military, pro-regime gunmen and the country’s other security forces to crush the protest movement that erupted in March, inspired by the revolutions in Tunisia and Egypt.

The deadly crackdown has only fueled the protests, in which tens of thousands have insisted they will accept nothing less than the regime’s downfall.

Assad, 45, who inherited power in 2000 after his father’s death, previously has made a series of overtures to try to ease the growing outrage, lifting the decades-old emergency laws that give the regime a free hand to arrest people without charge and granting Syrian nationality to thousands of Kurds, a long-ostracized minority. But the concessions did nothing to sap the movement’s momentum, being dismissed as either symbolic or coming far too late.

Shadi Hamid, director of research at The Brookings Doha Center in Qatar, said the speech was a “predictable disappointment.”

“The kind of language that Assad used suggests that he sees most of the opposition as being traitors and conspirators,” he told The Associated Press. “I think this was his final chance to show that he’s willing to take reforms seriously and, for the third time after three speeches, he made clear that he is not ready to commit to real democratic reform in Syria.”

Hamid said he expected protests to continue and international pressure to escalate. “The time line is not in (Assad’s) favor,” he said. “The question is, how long can Assad sustain the current situation?”

The Arab League, which had been largely silent on Syria, came out in strong support of the regime after Assad’s speech. Its deputy secretary-general, Ahmed bin Heli, an Algerian, said Syria was a “main factor of balance and stability in the region” and said the League rejects any foreign intervention in its affairs.

International pressure on the regime has been mounting steadily. On Monday, the European Union condemned the worsening violence in Syria and said it was preparing to expand its sanctions against the regime. But it stopped short of announcing new penalties, and it did not call for Assad to step down.

Almost 11,000 Syrians have fled the crackdown into neighboring Turkey in an embarrassing spectacle for one of the most tightly controlled countries in the Middle East.

Assad appealed to the refugees to come home, saying there would be no retribution.

But Hussein, a Syrian refugee who listened to Assad’s speech from a camp in Turkey, said he was too frightened to return after seeing Assad’s forces massacring their own people.

“I am not going back. I am not stupid,” he said, asking to be identified only by his first name for fear of reprisals.

Also Monday, the government tried to back up its claim that criminals were behind the unrest by taking journalists and foreign diplomats on a trip to a northern town where authorities say armed groups killed 120 security personnel two weeks ago.