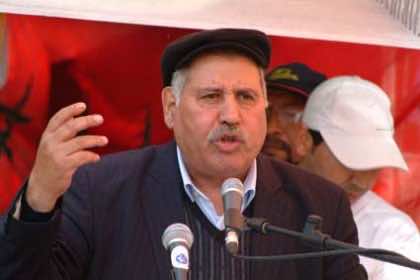 One of Morocco’s biggest trade unions urged its members on Monday to boycott voting in a July 1 referendum for a reformed constitution led by King Mohammed, adding weight to a youth-led movement’s opposition to the plan.

After some of the biggest protests in decades — inspired in part by the “Arab Spring” uprisings — the monarch announced on Friday he would devolve some of his powers to parliament and the government and put the reforms to a referendum on July 1.

“The proposed constitution reinforces what has always been applied in the past and does not deliver on what has been promised,” Noubir Amaoui, who heads the Democratic Labour Confederation (CDT), told Reuters.

The CDT becomes the biggest organisation to announce its intention to boycott the referendum after three small left-wing parties and the youth-led February 20 Movement, which was inspired by revolts in Egypt and Tunisia to demand the establishment of a parliamentary monarchy.

Although exact membership figures are hard to come by, in 2009 the CDT won most seats among trade unions at elections of representatives of public administration employees and also has a large following in the banking sector.

Under the changes, the king would retain his hold on security, the army and religion. That disappointed some opponents who had wanted to see the monarch hand over all his executive powers to elected officials.

“What we want is broad democracy and full transparency without the exclusion of anyone. Furthermore, the final copy (of the reformed constitution draft) did not correspond to the copy that was given to us: Some articles were changed without consulting us,” added Amaoui.

Amaoui also said with the referendum date set for July 1, the authorities “have not allowed enough time for Moroccans to understand what the new constitution is all about. They are using the same old tactic of surprise … Some people don’t seem to understand the changes happening around us.”

After facing the biggest anti-establishment protests in decades, King Mohammed in March ordered a hand-picked committee to discuss with political parties, trade unions and non-governmental organisations a constitutional reform. The brief was to trim the 47-year-old monarch’s clout and make the judiciary independent