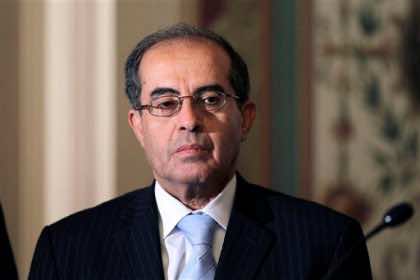 Senior Libyan rebel leader Mahmoud Jibril was due in China on Tuesday as Beijing intensifies its involvement in efforts to resolve the crisis in the oil-rich north African state.

Jibril, the top foreign affairs official in the Libyan opposition’s National Transitional Council (NTC), is scheduled to stay in China for two days, the foreign ministry said in a brief statement on Monday.

No further details about the trip were released.

Earlier this month, China – which has significant economic interests in Libya –  said it would welcome visits by the rebels who are seeking an end to strongman Moamer Kadhafi’s more than four decades in power.

Chinese diplomats have so far held two confirmed meetings with NTC head Mahmoud Jibril – one in Doha and one in the eastern Libyan rebel stronghold of Benghazi.

Libyan Foreign Minister Abdelati al-Obeidi also spent three days in Beijing earlier this month discussing ways to resolve the crisis, with China insisting a ceasefire should be the “top priority” of both sides.

China’s commercial interests in Libya include oil, telecoms and rail projects. It was forced to evacuate more than 35,000 workers from the north African state when unrest broke out in mid-February.

Until recently, Beijing had maintained its long-standing policy of non-interference and public neutrality on the conflict in Libya, calling multiple times for a peaceful end to the popular uprising.

Although it allowed the UN Security Council to green-light international military action against Kadhafi’s regime by abstaining from the vote on the resolution, rather than using its veto, it has criticised NATO-led air strikes.

The West has thrown its diplomatic and financial support behind the NTC, which has been recognised by about a dozen countries including Britain, France and the United States.

Jibril could ask senior Chinese officials for financial help, as the council has set a budget of around $3.5 billion for the next six months.

At a conference in Abu Dhabi earlier this month, donors vowed to help the rebels with cash and supplies.

Italy promised loans and aid worth 300 to 400 million euros ($438-584 million). France meanwhile said it would release 290 million euros of frozen Libyan funds for the NTC.