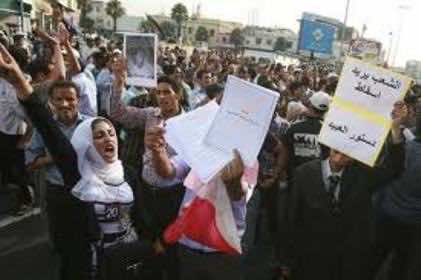 Campaigning for a referendum on constitutional curbs to King Mohammed VI’s powers opened in Morocco on Tuesday with the main parties urging a “yes” vote in the wake of uprisings elsewhere in north Africa.

As the government announced the start of the campaign and urged citizens to collect their new voters’ cards, a senior minister predicted the envisioned changes would help the country back on the road to stability.

“This constitution is going to bring a lot of positive things to Morocco,” Industry Minister Ahmed Reda Chami told AFP.

In a speech to parliament last Friday, King Mohammed VI proposed to devolve some of his wide-ranging political powers to the prime minister and parliament, among other changes.

The reforms are aimed at transforming the kingdom’s political system into a constitutional monarchy, a key demand of the youth-based February 20 Movement named after the date of Morocco’s first nationwide pro-reform protests.

“We need to go back to normal as soon as possible, then we’ll pick up those investments.”

Campaigning for the referendum will end on June 30, and the communications minister said Tuesday that all political formations would be able to speak freely to state-owned media.

“I confirm that all those participating in the referendum, including those who are hostile (towards it), will be able to express themselves freely,” said the minister, Khalid Naciri.

The country’s three biggest political parties — the Justice and Development Party, an Islamist formation; the Socialist Union of Popular Forces (USFP); and the conservative Istiqlal party — have urged their supporters to vote “yes” to the proposed changes.

Smaller opposition parties called for a boycott, while the February 20 Movement, which was inspired by other popular uprisings that toppled the leaders of Tunisia and Egypt, initially rejected the draft but has since said it would announce its position later.

“I was worried, because we were first in class before the Arab revolutions — I was worried that because Tunisia and Egypt would have more advanced constitutions — we would be left behind.

“I believe that the king has reacted swiftly. Now, with this constitution we will still be first or among the first in the class, which will give more stability to Morocco.”

He added that the pending changes would remove the impetus for protest, which most recently saw the February 20 Movement draw some 10,000 to a rally in Casablanca on Sunday.

“You can’t keep on going and protesting against something that’s really positive,” Chami said.

The Council of Europe’s parliamentary assembly, meanwhile, granted Morocco “Partner for Democracy” status in Strasbourg on Tuesday — a title meant to boost cooperation with parliaments of non-member states in neighbouring regions.

Abdelouahed Radi, the head of Morocco’s parliament and secretary-general of the USFP, thanked the council for this “encouragement and confidence.”