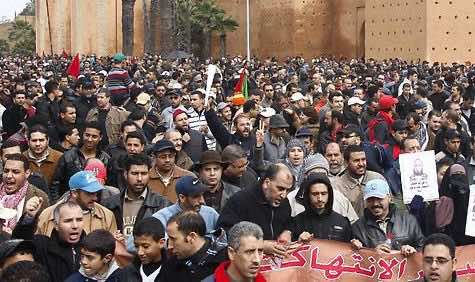 “We call for a boycott of this draft constitution which we reject,” the youth-based group said in a statement on its Facebook page, restating its demands for “dignity, democracy and social justice by peaceful means.”

It called for peaceful protest demonstrations in several cities on Sunday.

“We call on citizens to rally peacefully across Morocco to protest against this plan which does not meet the conditions of a democratic constitution,” it added.

In a speech to parliament Friday, King Mohammed VI proposed to devolve some of his wide-ranging political powers to the prime minister and parliament, among other changes.

Under the new draft constitution to be put to a referendum on July 1, the king would remain head of state and the military and still appoint ambassadors and diplomats, while retaining the right to name top officials of unspecified “strategic” administrations.

Most political parties have reacted favourably to the proposed reforms, which would boost the powers of the prime minister while preserving the king’s pivotal political and religious role.

Campaigning for the referendum kicked off Tuesday and will end on June 30.

Communications Minister Khalid Naciri said that all political parties participating in the referendum will be able to speak freely to state-owned media.

The February 20 Movement, which was inspired by popular uprisings that toppled the leaders of Tunisia and Egypt, was named after the date of Morocco’s first nationwide protest in a series of demonstrations this year.

After the February 20 protests, the king pledged major reforms including a strengthening of the independence of the judiciary and separation of the government and royal house.