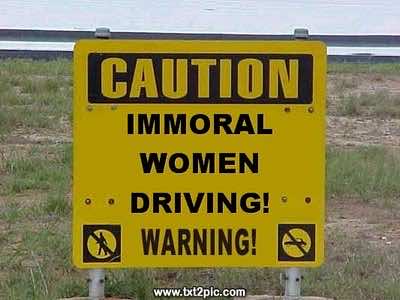 June 22, 2011- It would have been thrilling, of course, if Hillary Clinton had channeled Aaron Sorkin and smacked around the barbaric Saudi men who force women to huddle under a suffocating black tarp.

As Allison Janney’s C.J. Cregg once fumed on “The West Wing” about Saudi Arabia: “This is a country where women aren’t allowed to drive a car. They’re not allowed to be in the company of any man other than a close relative. They’re required to adhere to a dress code that would make a Maryknoll nun look like Malibu Barbie. They beheaded 121 people last year for robbery, rape and drug trafficking. They have no free press, no elected government, no political parties. And the royal family allows the religious police to travel in groups of six carrying nightsticks, and they freely and publicly beat women. But ‘Brutus is an honorable man.’ Seventeen schoolgirls were forced to burn alive because they weren’t wearing the proper clothing. … Saudi Arabia, our partners in peace.”

It would have been thrilling if Hillary 2011 had simply channeled Hillary 1995, when, as first lady, she made her bodacious speech in Beijing, declaring that “women’s rights are human rights.”

In her memoir, Hillary wrote that, despite pressure against it, she was determined to give that speech because she was fed up with “the crucial concerns of women” getting sacrificed “to diplomatic, military and trade issues.”

So it was startling on Monday when Saudi women activists, struggling to bring the Arab Spring to the medieval House of Saud by urging women to drive, chided Hillary for her silence.

Clinton’s office responded that the secretary had used “quiet diplomacy” — raising the issue, and more pressing ones, in a call with the Saudi foreign minister on the Day of Driving Dangerously.

By Tuesday, the secretary of state — who has worked hard for women under the radar and whose legacy will be shaped by her support of women’s rights around the world — realized that she needed to be a bit louder.

“What these women are doing is brave and what they are seeking is right, but the effort belongs to them,” she told reporters, adding that she wanted to “underscore and emphasize that this is not about the United States. It’s not about what any of us on the outside say,” but about “the women themselves.”

One Saudi liberal told me that Hillary should sing out: “Hillary should be more forthcoming and forget about oil. She should also focus on the plight of maids in Saudi Arabia. An Indonesian maid here was beheaded two days ago for killing her employer. Many workers are on death row and don’t get a fair trial.”

No one expected Hillary to be as exuberant as the Ukrainian feminists who cruised in solidarity around the Saudi Embassy in Kiev, covering their faces and baring their breasts.

Clinton is a diplomat now. She knows it’s tricky to push Bedouins, who get stubborn and dig in their heels. Saudis prefer concessions to be seen as gifts.

Still, because the Saudis are our drug dealers on oil, America has never fought hard enough for oppressed women in the authoritarian kingdom.

“We have bigger fish to fry,” a top foreign policy official told me this week.

The Saudis are disgusted with President Obama for what they see as his abandonment of Hosni Mubarak, dithering on a Palestinian state and being “unduly beholden to Israel,” as Prince Turki al-Faisal, the former Saudi ambassador to the U.S., wrote in a recent Washington Post op-ed piece. The prince said that Saudi Arabia and other Arab states would help Palestinians bypass the U.S. and Israel and seek statehood at the U.N.

The Arab News reported that the Saudi Women for Driving Internet campaign was “deemed a failure, as hardly any women drove that day,” only about 40, and most did not continue after Friday.

Saudi fans of the 87-year-old King Abdullah, who started the first co-ed university in the kingdom, are upset and surprised that he hasn’t already allowed women to drive.

They blame it on the resistance of the ultraconservative Prince Nayef bin Abdel Aziz, the interior minister who is believed to be responsible for jailing the first driver, Manal al-Sharif, for nine days. Nayef is said to be arguing with the more progressive king for additional time to prepare for female drivers.

Given the king’s declining health and the illness of his half-brother, the Crown Prince Sultan, the chance to give women any rights may be running out. Nayef, who has long been in charge of the roaming odious religious police who let those schoolgirls die in the fire in Mecca because they didn’t have their headscarves on, is a contender to replace the crown prince, and it’s unlikely he’ll pull a Nixon-in-China move on women’s freedom.

The juxtaposition of images said it all. A smiling Michelle Obama and her daughters meeting with Nelson Mandela was a vivid reminder of how far South Africa has come since it ended race apartheid under pressure. The small courageous spurt of ladies in black driving was a vivid reminder that Saudi Arabia, under little pressure, is still locked in